From Zelda Dungeon Wiki
Jump to navigation Jump to search
Want an adless experience? Log in or Create an account.
Temple of Darkness 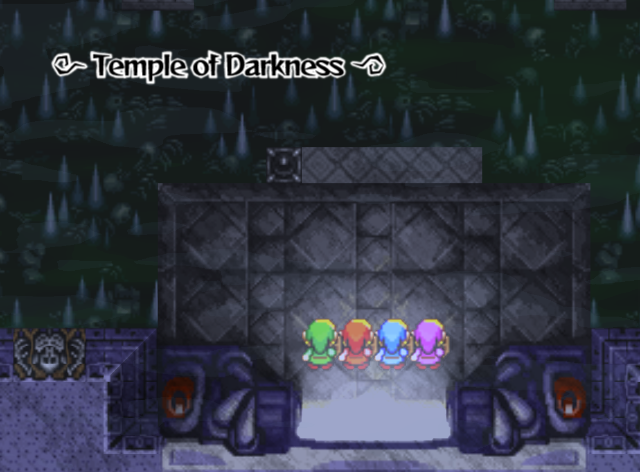 The Temple of Darkness is the fifth dungeon of Four Swords Adventures. It is the third and final stage in The Dark World level.

Like in many stages of Four Swords Adventures, several items are featured in the Temple of Darkness. The Links can obtain the Bow in the very first room, and they later use the Magic Hammer and Lamp. The Slingshot, Pegasus Boots, and Bomb are optional items that they can find.

The Moon Pearl is used frequently. There are two Moon Pearls in the dungeon, and both of them are needed to enter the Dark World.

There are also four Small Keys and two Heart Containers hidden in the temple. The first key comes from a Stalfos, and another from a group of Wizzrobes.

Popos are the very first enemies the four Links find in the dungeon, and there are several of them in the second room of the temple. Stalfos are very common; Anti-Fairies, on the other hand, only appear in the Dark World. Rats, Blade Traps, and Wizzrobes are also sparse. Rats and Blade Traps are only located in dark rooms that must be lit with the Lamp, and Wizzrobes appear in one room with many conveyor belts, where they guard one of the dungeons keys.

The Ball and Chain Soldier is the first mini-boss encountered in the Temple of Darkness. When the Links first enter the room, it is trapped behind many blocks, but the soldier can easily break them with his ball and chain. Once the blocks are broken, the Links can then get near enough to the enemy to attack it.

Two Dark Stalfos serve as another mini-boss. They are invincible while the Links are in the Light World, but as soon as they enter the Dark World, they become susceptible to attack.

The Links fight Phantom Ganon for the second time in this dungeon. However, unlike their previous duel at Hyrule Castle, Phantom Ganon splits into four different clones, all of which fire energy orbs at the Links. One orb is colored and can be hit back at the boss until one of the two parties miss. Once Phantom Ganon is hit, he is momentarily paralyzed and the Links can attack him.

When the Links first arrive at the temple, they find six Deku Scrubs waiting outside. One of them explains that they are there to make sure no "shady types" get into the temple.[1] Another says that Ganon told them to search look for groups of four, but he does not believe that the Links are a threat, so he lets them go.[2] Others came to pay their respects to Ganon, whom they worship.[3][4] The last two warn the Links that they will not be able to survive the temple.[5][6]

Some Deku Scrubs are found within the temple, too. The Links find one hiding within a room that the Deku claims is the foundation of a statue of Ganon after the explode a hole in the wall with a Bomb Flower.[7] Once they create holes in both the north and south ends of the foundation, they can push it over a pit in the room to get to the other side, and the Deku is furious.[8]

Four Deku can also be found in the Dark World, telling the Links about a monument and what the inscription will be.[9][10][11][12] The inscription can later help them solve a puzzle.

During the Infiltration of Hyrule Castle stage, the four Links rescued the White Maiden, who suggests that they head to the Temple of Darkness in search of the Dark Mirror to keep it safe from evil.[13] However, after defeating Phantom Ganon and heading into the mirror's room, they find that it is missing.[14]

They head into the next room and break the barriers to rescue the Red Maiden. She also expresses concern over the missing mirror.[15] The White Maiden then mentions how she heard the Deku worshipping Ganon.[16] The Red Maiden says that she heard a similar name in the desert, and she suggests that they head there to investigate.[17] After the maiden is freed from her crystal and she assumes the form of a Fairy, the four Links can move on to the next level, The Desert of Doubt.