From Zelda Dungeon Wiki
Jump to navigation Jump to search
Want an adless experience? Log in or Create an account.
Lost Woods 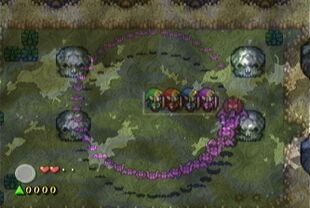 The Lost Woods is the first stage of The Dark World in Four Swords Adventures.

When the Links first arrive, the White Maiden explains that this was once the Forest of Light, but monsters have invaded.[1] The Deku Scrubs that live in the forest have taken to worshipping Ganon.[2][3] In order to reach Kakariko Village, the Links must find the Dekus' underground road that they are building to reach any location. However, in order to prevent people from leaving the forest as Ganon ordered, they hid every Shovel that they could find.[4] Fortunately, the Links obtain a Power Bracelet by helping Dekki and use it to access a Treasure Chest containing a key that opens the Shovel's hiding place.[5] They find the secret road and exit to Kakariko.

The layout of the Lost Woods is understandably maze-like. Most areas are very similar: vaguely rectangular in shape with four different pathways leading in each direction. A Deku Scrub taunts them for how easy it is to get lost, and another claims that those who lose their way become scrubs as well.[6][7]

Another notable feature of the woods is that there are many skull-shaped caves that the Links can descend into, which house things such as items or water jars. The Shovel is hidden in one of these.

Volume 5 of the Tingle Times can also be found on a sign near the beginning of the stage.[8]

The Keese Swarm is the first enemy encountered. It appears out of a bush in the area that the Links enter from. Anti-Fairies, Buzz Blobs, and Floormasters are the most common enemies, often appearing together. Floormasters grab the Links and take them into the Dark World, where Anti-Fairies await. A group of three Wizzrobes guard one of the stage's Small Keys. Once the Links stand on a switch in the Box formation, they appear.

Four swarms of seven bees also appear out of trees in certain locations. Two smaller Gohma serve as preparation for the larger one that is the stage's mini-boss.

Only one Keese appears in the whole level, in the Deku Scrubs' underground road.

There are six Shadow Links found in the stage:

The main items used in the Lost Woods are the Lamp and the Shovel. Roc's Feather and the Bow are also required, but only used once. In addition, the Pegasus Boots and Bombs are available, but not necessary.

The Lamp is used many times to burn through tree trunks to open up new passages in the woods. The Shovel is an important part of the level, and the Deku Scrubs refer to it often, usually talking about how they use it for their own purposes.[10][11] They dug an underground road with it, but in order to prevent intruders from finding it, they hid all of the shovels and stored away the key.[4][12] Once the Links get the key after defeating Gohma, they can finally obtain the Shovel and find the road.

The Power Bracelet is received from Dekki, a Scrub who gives the Links work. He asks them to bring three items in a particular order.[13] After they do so, Dekki gives them the Power Bracelet as thanks.[5] The item is used to move trees blocking the path that ultimately leads to the Shovel's key. It can also lift a tree that hides a Force Fairy for the Links to capture.

Only one Heart Container is found throughout the stage in a room with a Deku Scrub. There are also many flammable objects and some water jars and oil pots in a nearby skull cave. In order to make the Heart Container's treasure chest appear, they must stand on four switches in box formation.

There is one Moon Pearl in the Lost Woods. After crossing a pit with Roc's Feather, the Links encounter a room with Shadow Link and four switches. Once they hit the switches, two chests appear. One of them contains 150 Force Gems, and the other has the Moon Pearl.

There are only two Small Keys in the Lost Woods level. The first one is obtained by stepping on switch in Box formation and fighting three Wizzrobes. The key is used on a cave in the same area, where the Pegasus Boots and Roc's Feather are located.

The second is the main key to the Shovel's hiding place. According to the Deku's Bulletin Board, they hid the key in the same place they got it from after locking the Shovel's location.[14] It is found in a treasure chest after defeating a powerful Gohma, near a heavy log that must be lifted to jump over the gap back into the main part of the woods.

Gohma is the mini-boss of the Lost Woods. After defeating two much smaller Gohmas, the Links are faced with the mini-boss, which is much more powerful. As a result, it can both shoot fireballs and close its eye temporarily to avoid being hit. After it is killed, the Links can access a treasure chest with a key to the Shovel's resting place.

The denizens of the Lost Woods are almost exclusively Deku Scrubs. They all feel very comfortable in the darkness of the forest.[15] Most of them are seen guarding the Shovel's resting place, but a few are scattered in other places throughout the woods. They all worship Ganon because he awakened them from their "slumber".[16] As a result, many of the Deku Scrubs in the circle watching the Shovel speak about him and mention how he plans to spread the darkness of the woods to the rest of Hyrule.[17] One of them also complains about how a Deku Scrub named Decci has disappeared.[18]

There are two important Deku Scrubs, named Dekki and Deppi, who unintentionally help the Links through the level. They are found in the same area, although Deppi is in the normal world while Dekki prefers the Dark World because he likes dark places.[19] When they first speak with Dekki, he asks if they are there to help.[20] If they say yes, he tells them to bring Deppi three different items.[13][21] The Links can fail the job and get fired if they bring him the items in the wrong order, however.[22][23] Once they have completed their task, Deppi tells them to head down to Dekki in the Dark World.[24] Dekki is impressed with their work, so he gives them the Power Bracelet.[5]

A Great Fairy lives in the Lost Woods as well. However, the Deku Scrubs hid her away so that no one could upgrade the Shovels and find their secret road.[25] She can be found within a cave blocked by an unmovable skull. In order to meet her, the Links need to defeat the five Buzz Blobs in the area outside her cave. The skull vanishes, and she will upgrade the Links' items.