From Zelda Dungeon Wiki
Jump to navigation Jump to search
Want an adless experience? Log in or Create an account.
Keese Swarm 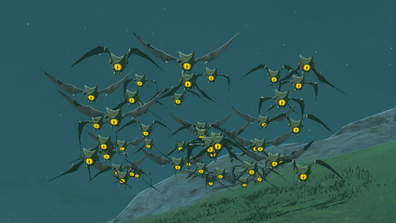 A Keese Swarm from Breath of the Wild

Keese Swarms are enemies that appear in Four Swords Adventures and Breath of the Wild.

Keese Swarms appear as a red Keese with many smaller purple Keese flying behind it as a tail. It appears twice in the game: one time each in the Lost Woods and The Swamp. In The Swamp, it appears out of a tree in the graveyard. In Lost Woods, it is in the same area that the Links enter the woods from, only appearing after they destroy or lift the southeastern bush on the right.

After appearing, the Keese Swarm immediately begins to circle the Links. Due to its long tail, it can trap them within the circle. In order to defeat it, they must hit the main red Keese with the Four Sword. The Wide and Long formations work the best; otherwise, it manages to fly away from attacks. Upon defeat, every purple Keese in the tail turns into a green Force Gem. Occasionally, the red Keese drops a Recovery Heart or red Force Gem.

Keese may attack in Keese Swarms in open fields at night in groups of 40-50 individuals, but only normal Keese will flock in such a way, as elemental Keese don't flock.

The swarms may attack Link repeatedly until they're fended off, causing them to flee. Usually striking a couple of Keese or shooting them with arrows as they approach may do the trick. If in need of Keese parts for armor enhancement, the most effective way of slaying multiple Keese in the swarm is to shoot them with Bomb Arrows under non-rainy weather, as the blast will down a considerable number of them.