From Zelda Dungeon Wiki
Jump to navigation Jump to search
Want an adless experience? Log in or Create an account.
Tower of Winds 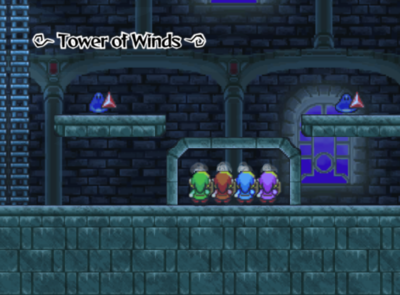 The Tower of Winds is a location in Four Swords Adventures. It serves as the third stage of Frozen Hyrule.

The stage is unique in many ways. One of the most obvious is that it is primarily sidescrolling, unlike most levels where a top-down view is used. When the Links enter a door the perspective still returns to normal, but in the main room it is only viewed from the side and they cannot use battle formations. The whole stage is about climbing up ten floors to the very top of the tower using ladders that appear or can be accessed only after solving certain puzzles on each floor.

Due to its location in Frozen Hyrule, there is ice in many of the areas, including one large frog-like ice mound that must be melted with the Fire Rod to proceed. Icicles also fall from the ceiling in select places. There are also some colored blocks that only one color of Link can push. A stone tablet can also be found with the advice of a previous adventurer, explaining how one can break cracked blocks by striking them forcefully from above.[1]

The Tower of Winds does not possess very many items. Roc's Feather and the Fire Rod and switched off constantly throughout the level, but the Slingshot is required once to hit switches and make a ladder appear on the second floor.

There are two Small Keys to be collected and used. The first is in a treasure chest that can be found by falling through a hole within a room on the second floor, and it unlocks a door up the stairs in the same room. The second is on the fourth floor and falls from the ceiling after standing over four switches in between some Mega Thwomps. It opens a door beneath the Thwomps in the same area.

A total of four Heart Containers are available in the Tower of Winds. Two of them are on the third floor; the first is behind some blocks of ice that can be melted with the Fire Rod, and the other is in the upper right corner of the area after activating the ladders with switches reached via Roc's Feather. On the fourth floor, one can be found by pushing aside some colored blocks and going to the right. The chest is in a room by itself. Finally, the sixth floor has a Heart Container that appears when the correct four switches, the ones on the right, are hit. If the wrong ones are activated, Stalfos will appear instead.

The Tower of Winds is one of the only two stages in the whole game to have more than one Blue Bracelet. Two of them are hidden in the tower. The first one is on the third floor below a Roc's Feather, and the second is on the fourth floor past colored blocks and to the left.

On the fourth floor, the Links can find a Force Fairy inside of a pot behind colored blocks.

Enemies are not particularly common in the Tower of Winds. The Force Gem Knights and Stalfos usually appear after standing on box switches. Zols are seen on both the first floor and during the mini-boss. Frosteyes are also seen in the mini-boss and are summoned by Frostare, the stage's boss. There is only one Anti-Fairy guarding a Roc's Feather, and the Bombchus and Keese appear in a single room together. The Mega Thwomps are only found on the fourth floor.

The mini-boss is found on the stage's seventh floor. When the Links first enter, they are greeted by three Frosteyes; however, after those are defeated, the usual mini-boss music starts and a large group of Zols fall from the ceiling. Upon defeating them, a ladder forms up into the next floor.

Frostare is on the ninth floor of the Tower of Winds. The Links find him hanging from the ceiling, surrounded by many Frosteyes, who he incessantly summons again if many of them are defeated. The Fire Rod and Roc's Feather are used; the Fire Rod can melt the ice at the bottom left-hand corner of the area to access a room with Roc's Feather in it. The Links must make their way to a doorway at the upper-left of the area, where they can climb a ladder above Frostare and find a small part of him clinging to the ceiling. After it is hit enough, he will fall and begin flying around the room, allowing the Links to attack him with the sword or Fire Rod until he is defeated.

After slaying Frostare, a group of ladders appears to allow the Links onto the tenth floor. There, they find the stage's Eye Barriers, which are imprisoning Princess Zelda. They can free her by destroying the barriers. She is very happy to see them and tells them they must hurry to the Realm of the Heavens, where they can finally face Vaati.[2] Zelda frees herself from her crystal and vanishes, allowing the Links to climb the stairs outside of the tower to the very top floor. They can exit the stage and then access the Realm of the Heavens.