From Zelda Dungeon Wiki
Jump to navigation Jump to search
Want an adless experience? Log in or Create an account.
Pyramid 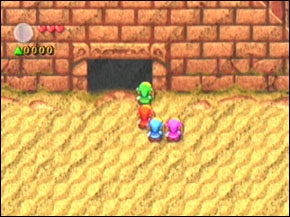 The entrance to the Pyramid

The Pyramid is the third stage of The Desert of Doubt in Four Swords Adventures. It once housed the legendary Trident.

The interior of the Pyramid is dark and typical of a dungeon. Its layout consists of a few basic rooms at the beginning before it opens into one large central room that can access most other sections in the dungeon. There are also many switches that must be pushed in to active, as well as some traps, such as floors that open up when the Links walk on them.

A Zuna can be found within a room filled with floor traps in the east of the dungeon. They complain about the wholes in the floor and wish they had Pegasus Boots to fly over them.[1]

Additionally, a Great Fairy lives in the Pyramid. Her fountain is found by lighting four torches with the Lamp in the west of the main room, opening a door that leads to her domain. She is required to upgrade the Pegasus Boots in order to complete the dungeon.

Gibdos are featured the most prominently in the Pyramid, even serving as the mini-boss at one point. However, other enemies can be found in specific rooms. Ropa appear in large quantities in concentrated areas; Mini-Moldorms only appear twice; and Keese are only found in cave areas. The Ropes gather in large groups.

The Pyramid has a total of five Shadow Links in it. The first is very close to the beginning with a floor trap, where he constantly leaps over the hole that forms whenever the Links come near. The second is in the room immediately after this one, which contains a maze-like design. The Shadow Link remains in the center of the room where he cannot be reached and continuously drops Big Bombs on the heroes.

The final three are in the latter section of the dungeon. Two are seen in the main room upon the first time the Links enter, both wielding Pegasus Boots, which they attempt to use to charge at the Links. The last Shaadow Link is in the middle of this main room, where many chests are guarded by him and a Gibdo. He uses a Magic Hammer on the Links.

Though the Pegasus Boots are the most important item of the dungeon, they are not found until later. The Slingshot is used first and can be found in a room containing many Ropa and Mini-Moldorms. The Lamp is a reward for defeating the mini-boss and required to light many torches, including two in the south of the main Pyramid room that open a door leading to the Pegasus Boots. Bombs are only needed at the very end of the dungeon to access the passage out of the main room.

There are two Moon Pearls in the dungeon. The first is uniquely trapped within a pot, unlike most of the pearls, which are located in chests. This pot is in the bottom right of the mini-boss's room and is needed to open a Moon Gate in the north and defeat that same mini-boss.

In order to reach the second Moon Pearl, the Links must first upgrade their Pegasus Boots with the Great Fairy. Following that, they can cross a series of floor traps that lead to the chest containing the pearl. It unlocks the Dark World portal just outside that room.

Two Small Keys are used to open up new passages in the area. One is in the first room with Shadow Link, near the beginning of the dungeon. There are two chests found upon entering the room. One contains the key, but the other has a Big Bomb. The key opens a door at the north of the same room. The other is obtained by shooting some switches with the Slingshot while the Links are in attack formation. The key falls from the ceiling, and opens a room on the right side of the main circular area.

A Big Key is also available in a room filled with treasure chests in the center of the main room. The chest is opens is larger than usual and in the middle of that treasure chest area. It contains a Giant Green Force Gem, which is worth 1000 gems.

Heart Containers can be used to increase the Links' health. One is found in a room where Shadow Link constantly throws Big Bombs in a chest to the east. The second is found after bombing a wall to the north off of the main room of the Pyramid.

Both Force Fairies in the Pyramid are found in pots. The first is in the Dark World during the fight against the mini-boss in the upper-left of the room. The second is located after the Links' second encounter with Mini-Moldorms, right before the boss.

The Pyramid's only Blue Bracelet is in the treasure chest-filled room in the center of the dungeon. It is found in the bottom-left chest.

The mini-boss consists of four Gibdos. After defeating them, they disappear into the Dark World, turning into Stalfos. The Links must use a Moon Pearl found in the same room to open a portal and slay them there.

The boss of the Pyramid is Big Moldorm. The Links must hit its tail in order to harm it; however, its tail changes color, and only the Link wearing the matching color can strike it. After two successful hits, the Big Moldorm splits into two.

Upon defeating the Big Moldorm, the Links enter a large door in the east, only to find a large indentation that should hold the Trident empty. The Red Shrine Maiden translates a tablet nearby, which is in an ancient language, and it explains that the Trident can be used for conquest.[2] She suddenly realizes that this likely means Vaati is not the ultimate evil, but Ganondorf, and he stole the Trident.[3]

In the next room, they find the Purple Maiden imprisoned. She thanks them and calls the other maidens to help her find Princess Zelda.[4] When they contact the princess, she tells them that she is trapped in the Tower of Winds and that Vaati's power is growing greater, but their connection is severed by the sound of evil laughter.[5][6] They instruct the Links to hurry to Frozen Hyrule to gather the final Royal Jewel and open the path to the tower.[7] All of them turn into fairies and fly away.