Cave of No Return

From Zelda Dungeon Wiki
Jump to navigation Jump to search
Want an adless experience? Log in or Create an account.
Cave of No Return 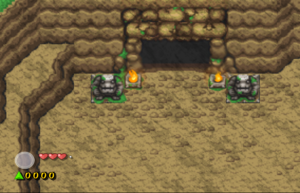 The Cave of No Return is the second stage of Whereabouts of the Wind, the first level of Four Swords Adventures. It takes place almost entirely within the barely lit cave, where the Lamp is the primary item used. The cave is lengthy and features many deterrents, including trap holes in the floor, enemies that cannot be defeated, and a potentially frustrating maze near the end of the level. The solution to this maze is Right, Left and Right again. If the path is not taken correctly, Link will have to start over again from the beginning of the maze.

Life is for the most part absent in the cave, except for a few enemies and a Mage at the start of the maze that will laugh at your chances of making it through. Ghosts can also be found in the maze, giving helpful tips before an obstacle. Like all second stages in Four Swords Adventures, Shadow Link is the boss of the stage. 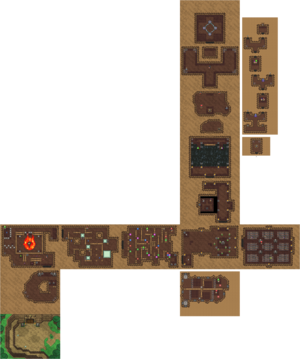 A map of the Cave of No Return