From Zelda Dungeon Wiki
Jump to navigation Jump to search
Want an adless experience? Log in or Create an account.
Desert of Doubt 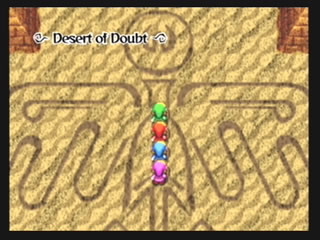 The Desert of Doubt is a stage featured in Four Swords Adventures. It is the first stage of the level entitled The Desert of Doubt. The Links start off in the Gerudo Village and make their way towards the Desert Temple. Along the way they visit the Zuna Village as well as rescue the Red Knight of Hyrule.

After defeating Phantom Ganon at the Temple of Darkness, the Links discover that the Dark Mirror is missing. The Red Maiden suggests that they head to the Desert of Doubt, since she heard of a Ganondorf there who had a name very similar to the one that the Deku Scrubs were worshiping.[1]

Once they arrive, the Links immediately enter the Gerudo Village. The Gerudos there confirm that Ganondorf was a member of their tribe, and he has fled toward the Pyramid.[2] The Links are given permission to then enter the more dangerous windy portions of the desert.[3]

Within the desert, there is a tablet that suggests the Links must go in the opposite direction of the wind in order to progress.[4] If they do not follow this advice, they will hear ominous laughter and then be transported back. As they make their way toward the Desert Temple, they also find the Zuna tribe. Eventually they fight a Big Dark Stalfos and free one of the Knights of Hyrule.

There is a wide variety of enemies present in the Desert of Doubt. Most enemies appear on the overworld, but Keese and one Force Gem Knight can be found in caves. Bubbles are only seen in the Dark World, and Cheep-Cheeps appear in one underwater cave.

The only active item in this level is the Pegasus Boots. At first is it used to break barriers. After the Great Fairy upgrades it, it can be used to run over sinkholes and pits around the desert.

A Moon Pearl is found early on within a cave. It is used to open a portal to the Dark World to defeat the Gibdos that turned into Stalfos to progress.

In addition to the regular Force Fairies obtained upon completing a stage, Link can find an extra Force Fairy in the tree in the middle of the Zuna Village by dashing into it with the Pegasus Boots.

The Gerudo Village is situated directly at the entrance to the Desert of Doubt. The Gerudo at the entrance explains that visitors are welcome, though they are currently in an uproar over a man who broke their laws.[5] The Links must speak to the Gerudo in the northeastern tent to gain access to the dangerous portions of the desert.

The entrance of Zuna Village

The Zuna Village is found deep within the desert, in a single oasis safe from the sandstorm winds. It contains small deposits of water as well. The Zuna resident at the entrance claims that visitors are very rare to their village.[6] The village contains a woman who will offer a sand rub for 100 Force Gems too restore some of Link's hearts. In the same tent, beneath a block, there is a mini-game owner who will allow Link to open one chest at the cost of 100 Force Gems with the chance of winning 1, 100, 150, or 300 Force Gems.[7] However, the game can only be played three times.[8]

A Great Fairy Fountain can be found underground in the third section of the windy desert. She assists the Links by upgrading their Pegasus Boots so they can cross a sinkhole in the sand as well as healing them.[9][10]

Just before the boss, the Links encounter four Shadow Links with Bombs. The Shadow Links will enter and exit blocked caves scattered around the screen and attack them. They will also randomly place down Bombs and may transform into one of the colored Links.

Getting the Red Royal Jewel

The boss of the Desert of Doubt is a Big Dark Stalfos. The Links must first kill the Stalfos in the regular world, and then they will be sucked into the Dark World to fight the boss itself. Upon defeating it, the boss transforms into one of the Knights of Hyrule, specifically the one tasked with protecting the Red Royal Jewel. He reveals that the one who created Shadow Link was not Vaati but Ganon, who tricked Link into breaking Vaati's seal. He grants the Links their third jewel.[11]