From Zelda Dungeon Wiki
Jump to navigation Jump to search
Want an adless experience? Log in or Create an account.
The Swamp 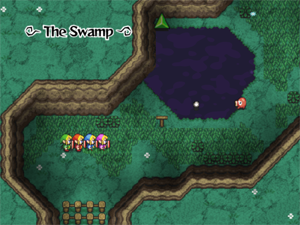 The Swamp is an area from Four Swords Adventures. It is the second stage of level four, Near the Fields. Kaepora Gaebora tells Link that it was once a pure place, but Vaati cursed the water and they are now poisoned. Very few living creatures remain, allowing monsters to overrun the land.[1]

The stage consists of two main portions: The Swamp, and the Graveyard. The Swamp is where the Links first arrive. It is filled with poisoned water that deals half a heart of damage if Link falls into it. Volume four of the Tingle Times, signs written by Tingle, is found in The Swamp, where Tingle complains about getting stuck in sludge and suggests hopping on leaves.[2]

Some leaves hide Zora-like creatures beneath them, which will occasionally spring out of the water, lifting up the leaf on their heads. If the Links stand on it when it pops out of the water, they will be flung into the air, allowing them to jump higher than they could before.

The Graveyard section is haunted by many moving objects and contains several graves. The Links can push the graves back to sometimes reveal rooms or passages beneath them.

Dampé is the only human inhabitant of The Swamp, where he lives in a house in the northwest of the Graveyard by himself. He tells the Links that it is dangerous outside, and then he mentions a tale about a Dark Mirror in the Forest of Light.[3]

Link can also find two ghosts in the Graveyard area. One is the spirit of a little girl, who was left behind by her friends when she came into the Graveyard on a dare.[4] The other is found in a dark area next to the Lamp, where he explains that he came to visit his late wife's grave, only to find her claiming that she was visiting his grave.[5]

Additionally, a Great Fairy lives under a grave in the southeast of the Graveyard. She will restore Link's health.[6]

The three main items of The Swamp are Roc's Feather, the Bow, and the Lamp. Roc's Feather is found first and used the most often. The Bow is found next and is used to activate switches, and the Lamp is used only at the very end of stage, just before reaching the boss, to light the way.

The Moon Pearl is also in a chest under a grave. Beneath the grage is a maze-like area with Keese and Blade Traps. Link must hit switches with the Bow in order to proceed. It is in a room right after the stage's third Heart Container, in an empty room filled only with blocks, one of which must be pushed in or to open the exit to the outside.

There are two Small Keys in The Swamp. Both are underground and required to reach the Moon Pearl and third Heart Container. One is in a treasure chest guarded by a Blade Trap, and another falls from the ceiling when four switches are activated with the Bow.

There are three Heart Containers as well, all of which are situated in caves. The first requires the use of Roc's Feather to reach, in which Link must jump into the air and then down thrust to break the blocks that block off the Heart Container's treasure chest. The second is alone in a cave just south of the Graveyard's entrance. Finally, the last Heart Container is in the Graveyard, underneath a grave. In a treasure chest in a room filled with Blade Traps.

Both Octoroks and Vultures are common at the beginning of the stage, but as it progresses, they eventually become non-existent. Keese and Blade Traps appear in multiple caves. As for the Keese Swarm, there is only one in the entire level, hiding within a tree in the first section of the Graveyard.

The Ghini and Giant Ghini are found exclusively within the Graveyard of the stage. The smaller Ghini mostly prefer to crowd around graves. At one point, the area is completely dark aside from two searchlights. When they catch Link, both lights immediately snap to him and then a circle of Ghinis form.

Giant Ghinis are seen outside Dampé's house and can only be defeated by having all four Links stand on separate switches to light up lamps. The Giant Ghinis are killed by the light. Both types of Ghini also appear in the boss battle at the end of the stage.

In addition, some objects in the Graveyard will attack the Links. Rocks in the first area will move on their own away from them when they get close before lunging forward and eventually breaking upon hitting one of the Links. In another area, graves will also fly at Link; only the graves that have secret passages beneath them remain stationary.

As usual, Shadow Link appears twice in the stage. The first time Link encounters him is in the second area, where Shadow Link incessantly throws an unlimited amount Big Bombs until they exit the area, forcing the Links to escape into caves and only emerge for short periods of time to avoid being killed by it. The second time is in the same area as the flying graves.

Returning yet again is the Chief Soldier, a common mini-boss in Four Swords Adventures. It is surrounded by many regular Soldiers. The strategy is the same as in the past; the Links must hit the Chief Soldier from behind in order to harm him.

Jalhalla is encountered for the very first time in The Swamp. When the Links first arrive in the area, they only see four Giant Ghinis. However, when each of the four Links stands on a separate light switch, Jalhalla appears and summons Ghinis. The Links must stand on the light when Jalhalla is near one of the lanterns, because it weakens him, making him susceptible to attack. Once Jalhalla is defeated, the Links can move on to the next stage, Infiltration of Hyrule Castle.