Realm of the Heavens (Stage)

From Zelda Dungeon Wiki
Jump to navigation Jump to search
Want an adless experience? Log in or Create an account.
Realm of the Heavens 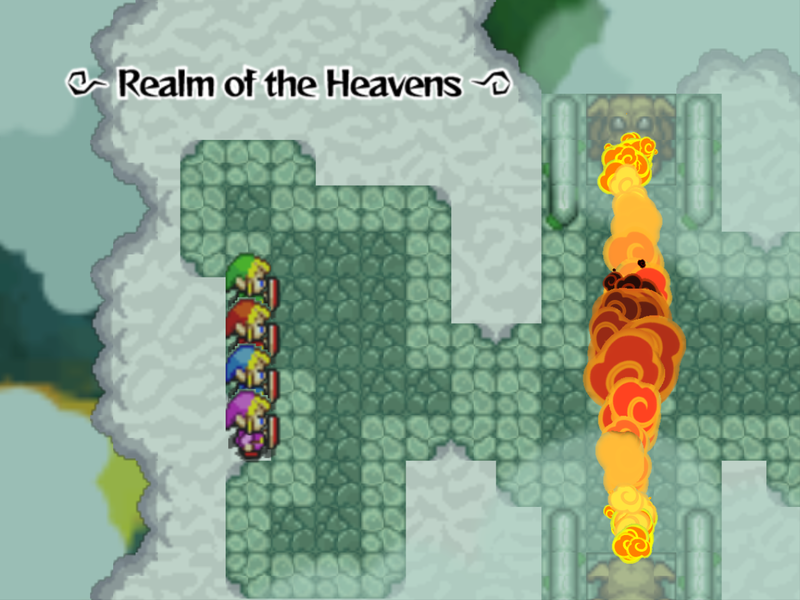 Realm of the Heavens is the first stage of the eighth and final level in Four Swords Adventures. As its name suggests, it takes place in the sky, above the clouds.

After freeing Zelda in the Tower of Winds, the princess explains to the Links that the Realm of the Heavens is overflowing with evil creatures created by Vaati. She instructs them to head to this realm and cleanse it of evil.[1] This stage serves as a path to The Dark Cloud and ultimately the Palace of Winds, where Vaati awaits.

The Realm of the Heavens consists of a wide area on top of the clouds. The Links can easily fall off the edge and take half a heart of damage. At one point, the Links must endure high gusts of wind that can only be stopped by hitting switches to avoid being blown off the edge.[2]

The stage features a wide variety of traps and secrets. Flame geysers appear often. At times, there are mysterious holes in the clouds that reveal hidden rooms when the Links fall into them. Portals that resemble Moon Gates allow the Links to exit these rooms. There are also some unique platforms that let the Links access other sections of the stage when the clouds are separated, such as bridges that change colors, which only the Link whose tunic matches that color can cross. One platform has four switches that, when pressed, move the platform in certain directions. The Links have to stand on these switches to navigate through a maze of flame geysers.

The Realm of the Heavens does not heavily rely on the use of any one item. Instead, these four inventory items serve to solve one or two brief puzzles so that they can proceed through the stage.

Roc's Feather is the first item located. It is found in the Dark World alongside the stage's only Moon Pearl and is used to hop across small, moving clouds and allow the Links to access the second section of the stage. The Hammer allows the Links to strike the ground and find items hidden under the clouds. Small mounds appear when they use the Hammer in Manhandla's room, and the only way to flatten them and make the secret they are concealing appear is to hit them. The mounds contain mostly Force Gems, but they also house a Small Key that is necessary to access the next area. The Pegasus Boots are only required to cross a long, color-changing bridge, and the Bombs are only used in the boss battle. These bombs can also be upgraded to Level 2 bombs, which appear in four chests during that battle.

There are four Heart Containers in the Realm of the Heavens. The first is inside a chest in one of the holes in the clouds in the same room where the Links fight the Chief Soldier. Another is found shortly afterward in a room north of this one, down another tornado-like hole. The third is hidden in a mound in Manhandla's room that becomes visible by striking the clouds with the Magic Hammer. This mound is in the northwest corner of the room and the hammer must be used to get the Heart Container out of it. The fourth and final container is in a chest in the southwest of one of the rooms with color-changing platforms.

Only one Moon Pearl is found in this stage. It appears in a chest after fighting the second Chief Soldier, and its Moon Gate is in the same room as the first Chief Soldier.

There is one essential Small Key inside of a mound in Manhandla's room. It must be revealed by hitting the mound with the Magic Hammer.

Most of the enemies in the Realm of the Heavens are Soldiers. There are several varieties and colors, including blue, brown, and green soldiers, as well as Archers, Bomb Knights, and even two Chief Soldiers. As Soldiers are prone to do, they usually appear in large groups and attempt to overwhelm the Links. Aside from them, Eyerocs are also encountered twice, one Force Gem Like can be found, and there are both red and blue Tektites. There is only one Shadow Link in this stage, and he is encountered rather early on.

A total of two Chief Soldiers threaten the Links in the Realm of the Heavens. Both of them are accompanied by four smaller soldiers. They appear early on in the stage in rooms very close to each other. The reward for defeating the second Chief Soldier is a Moon Pearl, which can then be used on the Moon Gate in the first Chief Soldier's room.

After having been defeated at The Coast and Frozen Hyrule, Manhandla appears for a third and final time in the Realm of the Heavens. Like before, the Links must each strike the mouth that matches the color of their tunic. It becomes faster and fasrer as more mouths are destroyed, and it shoots out fireballs and the mouths regenerate if they hit the wrong one. After its defeat, the Links receive Force Gems.

The boss battle begins with two small, regular Dodongos. After feeding them with three bombs, they are killed. However, after they vanish, the Big Dodongo appears. It is more powerful and cannot be harmed by the normal bombs, so the Links must collect the Level 2 bombs from the treasure chests in the same room. These bombs are larger and can harm the Big Dodongo when fed to him while he is trying to breathe fire. He is killed after three of these Level 2 bombs, letting the Link access the stage's Eye Barriers and move on to the next stage, The Dark Cloud.