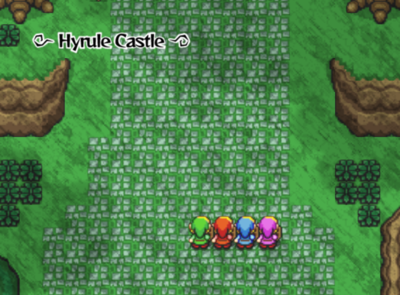 Hyrule Castle is the third and final stage of Whereabouts of the Wind, the first level in Four Swords Adventures. The stage takes place almost entirely in and around Hyrule Castle, which is swamped by Soldiers and other enemies. Like many other elements of the game do, the inside and outside of the castle greatly resemble the castle from A Link to the Past. This version, however, is much larger and contains many more rooms and enemies.

When the Links arrive at the castle, the entrance is locked, forcing them to find a secret underground entrance. This entrance leads them to a switch that will open the main gate and allow them inside. After entering the Links must make their way through the rooms, hallways, and even walk on the roofs to progress. The Links will eventually reach an open courtyard with a Chief Soldier and a horde of Soldiers that will attempt to stop them from progressing.

After defeating these enemies the Links can access the next area where a River Zora is looking for help to make her body whole once again.[1] After doing so the Zora is revealed to be the Queen of Fairies.[2] The Queen immediately helps the Links by destroying all of the on-screen enemies with magic and removing the barrier blocking the way forward.[3][4][5] The Queen of Fairies then thanks the Links and promises to alert all other fairies of their quest.[6]

More rooms await the Links, and after completing them and moving higher through the Castle the Links find the boss: Phantom Ganon. Upon its defeat a path will open up to the Blue Maiden.

Hyrule Castle is revisited during the fourth level, Near the Fields. The stage is named Infiltration of Hyrule Castle and is the last stage of the level. It takes place at night and requires stealth, where the Links explore different areas of the Castle.