This article is about the character in The Wind Waker and Four Swords Adventures. For character in other games, see Fairy Queen. 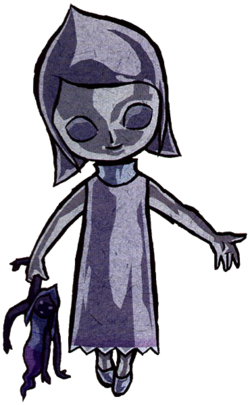 Queen of Fairies from The Wind Waker.

The Queen of Fairies is a character in The Wind Waker and Four Swords Adventures.

In The Wind Waker, the Queen of Fairies lives in the largest part of the Mother and Child Isles. She can only be reached if Link warps there with the Ballad of Gales. Before Link rescues his sister, she will speak to him and say that it is not the time for them to meet, and that he must first save the girls in the Forsaken Fortress.[1] She also mentions that there is someone else whom he must protect, referring to Princess Zelda.[2] When he returns after meeting Zelda, she appears in a shower of sparks and introduces herself.[3] Her appearance is like a child, and she holds a doll resembling the Great Fairies found across the Great Sea. She then grants him the Fire and Ice Arrows for his Bow.[4] She tells him that he can use the Fairies in the fountain to ease his weariness, and then, right before disappearing, she says that he is "just her type".[5]

The Queen of Fairies in Four Swords Adventures appears on the final stage of Whereabouts of the Wind, Hyrule Castle. When the Links first meet her, she appears as a Zora-like creature. She explains that she headed to the castle to rescue the Shrine Maidens, but she was instead captured and split in two, forced into her current form.[6] If the Links help her find her other half on the opposite side of the castle, she tells them to take her to the barrier preventing them from heading inside of the building.[7]

When they arrive, the halves combine and she turns back into her normal form as a Great Fairy.[8] Multiple Soldiers then appear, but she easily destroys all of them with a power similar to that of the Bombos Medallion.[9] After they are gone, she breaks the barrier for them.[10] Just before leaving, she promises to tell all of the Great Fairies around Hyrule to help them if they are in need.[11]