From Zelda Dungeon Wiki
Jump to navigation Jump to search
Want an adless experience? Log in or Create an account.
David Jr. 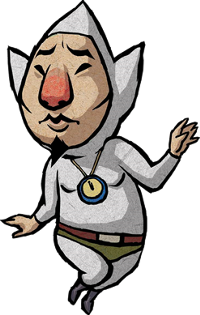 David Jr. is a character from The Wind Waker and The Minish Cap.

David Jr. washed ashore onto Tingle Tower at the age of 17 after a shipwreck. He and Tingle's younger brother, Ankle, were then forced to work for Tingle. David Jr. wears a white version of Tingle's signature outfit. If Link uses the Tingle Tuner, and talks to David Jr., he makes a comment about Tingle being kinder when Link contacts him. If Link completes the Knuckle GBA event at Outset Island, Knuckle will replace David Jr.

Link is able to return to David Jr. at anytime to speak with him in which he will let Link know how many possible Kinstone fusions there are remaining in the world.

David Jr. is one of playable character in multi-player mode ( 2-4 players) of Tingle's Balloon Fight DS. Other players play as Tingle, Ankle, and Knuckle.