From Zelda Dungeon Wiki
Jump to navigation Jump to search
Want an adless experience? Log in or Create an account.
Ankle 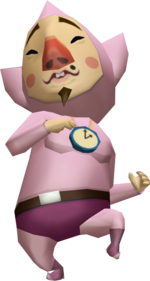 Ankle as seen in The Wind Waker

Ankle is one of the four Tingle Brothers, with the other three being Tingle, Knuckle, and David Jr. Of these brothers, Ankle is the purple-wearing twin of Knuckle, making the two of them the youngest of the brothers.

In The Wind Waker, Ankle holds a small role. He continuously propels the Tingle Tower on Tingle Island along with David Jr., keeping it spinning forever. Tingle taught Ankle how to decipher maps, but doesn't help Link with his maps since he is too busy spinning the tower.

Ankle has heard about Link from Tingle and Ankle tells Link that Tingle said he owes a lot to the fairies.[1] Even after fusing the initial Kinstone with Ankle, Link can fuse random green Kinstones with Ankle.

Link is able to return to Ankle at anytime to speak with him in which he will let Link know how many possible Kinstone fusions there are remaining in the world.