From Zelda Dungeon Wiki
Jump to navigation Jump to search
Want an adless experience? Log in or Create an account.
Biggoron 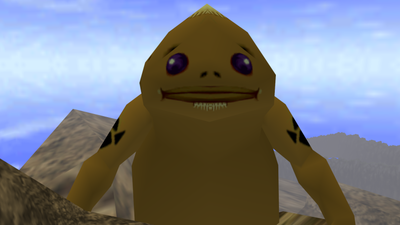 Biggoron is a recurring character in The Legend of Zelda series.

Link first encounters Biggoron on the Death Mountain Summit. He complains that his eyes are suffering a great deal of pain because of the recent Death Mountain eruptions. He says that he will make Link a powerful blade (Biggoron's Sword) if he can heal his eyes. To do this, Link must complete the Trading Sequence.

Biggoron is the Terminian counterpart of the Goron of the same name and size, Biggoron, the maker of Biggoron's Sword from Ocarina of Time. In Majora's Mask, he is the guard of the Snowhead Temple who has strangely disappeared and his fellow Gorons do not know where he is.

He first appears at the foot of Snowhead Temple, although at the time, Link does not know that it is him using his breath to create big gusts of wind. Due to some type of curse, he is invisible and can only be seen with the Lens of Truth. It is possible that because of these two things that he is more than likely the culprit behind Darmani's death.

After using the Lens of Truth to see through Biggoron's invisibility, Link, in the form of a Goron, uses the Drums of Sleep to play the Goron Lullaby. This causes Biggoron to go to sleep and fall into the gorge below. After defeating Goht and returning to the foot of Snowhead Temple, Biggoron is seen standing in the gorge irritated and tells Link that he can't remember what happened, but that he went to figure out why the village was frozen by going to the temple. This gives a seed to the idea that Skull Kid possibly placed him under a spell to prevent people from getting to Snowhead Temple to defeat Goht.

Biggoron is located on the top of Goron Mountain. He is the sixth person in the Oracle of Seasons Trading Sequence. He is feeling under the weather and Link can give him Lava Soup to make him feel better. In exchange, Biggoron will give Link the Goron Vase.

After Link has defeated Vaati, he can have Biggoron nibble on his Shield to make it the Mirror Shield.

Biggoron is the chief of Goron Island. He has a son named Gongoron. This is by far Biggoron's smallest appearance, with him being not much larger than the average Goron.