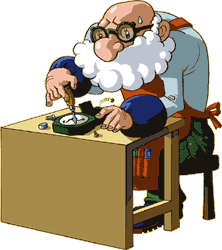 Tick Tock is a character featured within Oracle of Seasons and serves as the owner of the Clock Shop.

Tick Tock lives and works within the Clock Shop near the center of Horon Village. He spends his time as a clockmaker where he can constantly be seen tweaking clocks. Tick Tock's plays a role during the Trading Sequence. If Link speaks to him early in the quest, Tick Tock tells him that he wants to make a Cuckoo Clock better than any before, but in order to do so, he needs the right Wooden Bird.[1]

As Link progresses in the Trading Sequence, he acquires the Wooden Bird from Syrup, located in the Witch's Hut at Sunken City. Link can return to Tick Tock and finds that he is ecstatic about the Wooden Bird.[2] In exchange for the Wooden Bird, Tick Tock gives Link the Engine Grease.[3]

Just behind the Clock Shop, there is a secret staircase that can be discovered by digging with the Shovel. The staircase leads to an empty room. However, in a Linked Game, the room is inhabited by an Old Man. Link can tell the Old Man a Secret and after completing a challenge, he can earn the upgraded Noble Sword or the Master Sword.