From Zelda Dungeon Wiki
Jump to navigation Jump to search
Want an adless experience? Log in or Create an account.
Biggoron's Sword 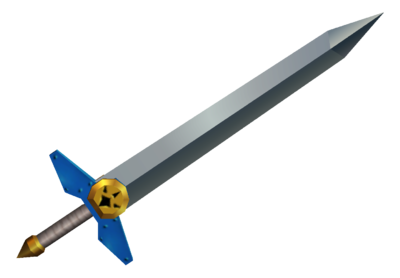 Model of Biggoron's Sword from Ocarina of Time 3D

Biggoron's Sword is a recurring item in The Legend of Zelda series.

"A huge, sturdy, and very sharp sword. You can't use a shield while wielding it."

It is earned by completing a long Trading Sequence that involves time limits and other difficult obstacles, in the course of which Link obtains the Broken Goron's Sword, which Biggoron can reforge into his eponymous blade. Biggoron's Sword is so big it requires two hands to hold it — thus, Link is not able to use the Shield while using Biggoron's Sword. The trade-off for not being able to use a shield is that it does the most damage of any sword in the game; double that of the Master Sword. Additionally, unlike the otherwise-similar Giant's Knife, the blade is unbreakable.[1]

"A legendary greatsword forged by a Goron craftsman for a hero who traveled through time. The exceptionally sharp cutting edge is a testament to the craftsman's mastery."

Biggoron's Sword makes a reappearance in Breath of the Wild, this time as an amiibo exclusive, two-handed weapon. It has a base power of 50 and a durability of 60 (making it the most durable amiibo melee weapon in the game), and can be obtained by scanning a Link (Ocarina of Time) amiibo through the use of the amiibo Rune. Scanning the amiibo will drop various items from the sky, along with a treasure chest, which has a chance of containing Biggoron's Sword, but can also contain different items. The amiibo can only be scanned once per day.

Biggoron's Sword is a weapon for Link in Soulcalibur II. Unusually, while still longer than the Master Sword, it is a one-handed rather than two-handed weapon.