From Zelda Dungeon Wiki
Jump to navigation Jump to search
Want an adless experience? Log in or Create an account.
Adult Wallet 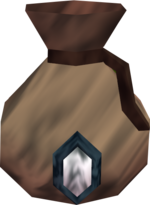 The Adult Wallet, or Adult's Wallet, is a recurring Wallet in The Legend of Zelda series.

The Adult's Wallet is the first Wallet upgrade in Ocarina of Time. It allows Link to carry 200 Rupees, which is 101 more than he could hold previously. It is acquired by defeating 10 Gold Skulltulas, collecting the Gold Skulltula Tokens they drop, then going to the House of Skulltula.The first child who has been freed of the curse rewards Link with the Adult's Wallet in thanks. It can later be upgraded in the same way to the 500 rupee Giant's Wallet after collecting 30 tokens in total.

The Adult Wallet appears in Majora's Mask as a pale brown sack with a silver hexagon on the front. This silver hexagon looks very similar to a Silver Rupee. It can be upgraded to the Giant Wallet by collecting 30 Gold Skulltula Tokens from the Oceanside Spider House (on the First Day only in the N64 version).