From Zelda Dungeon Wiki
Jump to navigation Jump to search
Want an adless experience? Log in or Create an account.
Oceanside Spider House 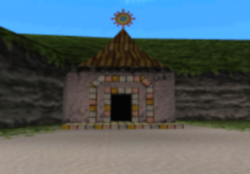 Exterior of the Oceanside Spider House

The Oceanside Spider House is a location that appears in Majora's Mask. It is situated on the shore of the Great Bay Coast next to the Fisherman's Hut. This Spider House is one of two within Termina; the other is located within the region of Woodfall, similarly named Swamp Spider House. If Link manages to rid the house of its curse on the First Day, he is awarded with the Giant Wallet by a cursed man who is interested in purchasing the house. This creepy house also houses a Piece of Heart which is guarded by a puzzle that requires the Captain's Hat.

Location of the Gold Skulltulas

If Link has obtained the Captain's Hat, he can talk to the six Stalchildren that are scattered around the house. Two of them are in the library, while the last four are sitting at the table in the dining room. Each Stalchild tells when to shoot a certain colored mask, that correlate to the ones located in the dining room. After talking to all six of them, Link must shoot the masks in the order given to him. If done correctly, the gate opens, leading to a passage containing a Skullwalltula and the Piece of Heart.