From Zelda Dungeon Wiki
Jump to navigation Jump to search
Want an adless experience? Log in or Create an account.
Zora Game Site 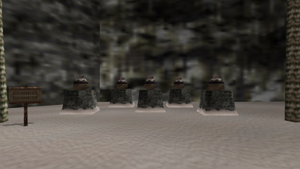 The Zora Game Site is a location in Majora's Mask. It is situated in Zora Cape. It is run by two Zora, and consists of five pots situated on the top of five stone pillars. The goal of the game is to break all the pots at once. This can be done as Mikau, with the Boomerangs, if he is in the right spot. Furthermore, it can also be accomplished by using a Powder Keg in the center of the pots. If Link wins, he is awarded 100 Rupees, but he has to pay back 10 Rupees in order to replace the pots, leaving him with a net gain of 90 Rupees. If Link fails, he has to pay them 10 Rupees, unless he has less than 10 Rupees, in which case he won't have to pay for them.

As told in the game by the Zora, Mikau was an expert at breaking all of them with the Boomerangs.