From Zelda Dungeon Wiki
Jump to navigation Jump to search
Want an adless experience? Log in or Create an account.
Goron Shrine 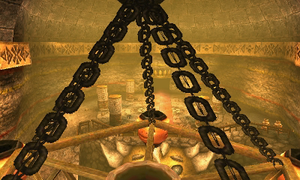 The Goron Shrine is a location in Majora's Mask in the Snowhead region of Termina. It is located at the center of the Goron Village and only members of the race are allowed to enter. The Goron Shrine is a place of residence and prayer for Gorons. It is also a location in which the Gorons take shelter from the harsh winter. This is the prime place where the Goron Elder and his Son reside.

Inside, Link can hear the wailing of the Goron Elder's Son.[1] The Gorons are fretting about him and don't know what to do.[2] The Goron Elder has ventured off to try to lift the curse of snow from Snowhead like the hero Darmani, who died in the attempt, so he cannot quell his son's tears.[3][4][5] The Elder can be found in a frozen snow boulder in the Mountain Village area, and if Link pours Hot Spring Water on him, the ice thaws the snow boulder and the Goron Elder is now freed. Link then informs the Goron Elder about his son, and he teaches Link the first part of the "Goron Lullaby" to calm the son down.[6]

Within the confines of the Goron Shrine is a shop where Link can buy Red Potions, Arrows and Bombs. Once spring comes to Termina, bombs are less expensive than anywhere else in the world. Prices are much cheaper in the springtime as the spirits of the Gorons are lifted and the flow of business resumes normally.[11]