From Zelda Dungeon Wiki
Jump to navigation Jump to search
Want an adless experience? Log in or Create an account.
Gossip Stone 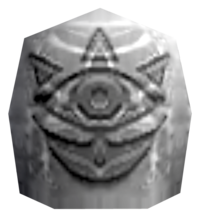 Not to be confused with a Sheikah Stone

Gossip Stones are recurring objects in The Legend of Zelda series.

In Ocarina of Time, Gossip Stones tell Link the current time when struck, or tell him gossip when wearing the Mask of Truth. Gossip Stones also encompass Fairies, which can be released by playing Zelda's Lullaby in front of it. Without the mask, Link will only be able to know the current time when struck. Also, when Link selects the stone, he will be told that the stone's stare is piercing into him. With the mask on, Link will be able to listen to the stone's gossips. There are a total of 32 gossips in the game. The gossips are usually a helpful hint.

In Majora's Mask, Gossip Stones provide Link with the remaining time until the Moon crashes into Clock Town when struck, or tell him gossip when wearing the Mask of Truth. There are also several Gossip Stones located in holes throughout Termina, which Link can play music to in order to get Pieces of Heart. Link can get a total of 4 Pieces of Heart by doing this. Link must either play the Sonata of Awakening, Goron Lullaby or New Wave Bossa Nova to acquire these Pieces of Heart. There are a total of 50 gossips in the game.

Hardly a Gossip Stone at all, the Pirate's Charm is an item that Link and Tetra carry with them to communicate. It was said to be an enhanced version of a Gossip Stone, made by Daphnes Nohansen Hyrule.

In Phantom Hourglass, Gossip Stones have a different function than those in previous installments. They can only be communicated with a simple sword slash. They usually appear in dungeons, typically one per floor. They give Link the location of treasure chests for a small fee of 20 Rupees. Link can then copy down their locations onto his Dungeon Map. Thus, they replace the Compass from other games. They are also found on Maze Island, and in various other places in the overworld giving Link helpful hints.

In Spirit Tracks, Gossip Stones act very similarly to those in Phantom Hourglass, but rather than a moustache, they have rabbit ears. To communicate with them, Link must play the Song of Awakening. Only then will they give Link the locations of various treasure chests for a fee of 20 Rupees.

In Skyward Sword, Gossip Stones can be found by looking for any area where Link can see butterflies flying around a particular area. If Link plays his harp, a Gossip Stone rises from the ground, and as they come up, a Treasure also pops out. If Link talks to them, they give him tips like in Ocarina of Time, but in this game, Link does not have to wear the Mask of Truth. Using different items causes them to spin, shrink, and even fly into the sky like a rocket and explode. Don't worry, another one takes its place instantly.