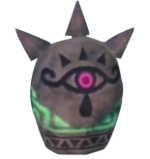 A Sheikah Stone as it appears in Skyward Sword

Not to be confused with a Gossip Stone

A Sheikah Stone is a reoccurring object in Ocarina of Time 3D, Skyward Sword, and Majora's Mask 3D. Their primary purpose is to aid Link in his quest, whether it may be from helpful advice or a useful item. They are similar to appearance to Gossip Stones from the original Ocarina of Time. Sheikah Stones may give Link a vision of what he must do next in his quest, making them used as a sort of walkthrough.

In Ocarina of Time 3D, there are two Sheikah Stones. One of them is located right outside Link's House in Kokiri Forest, and the other is in the Temple of Time. In this game, Sheikah Stones give visions of actions that Link must take to progress in the game. They serve as hints that can offer guidance and solutions to tough puzzles if needed. Helpful as these are, there are no Sheikah Stones in the Master Quest. In order to receive the visions, Link must crawl inside the Sheikah Stone and then select the vision he wishes to view in order to aid his quest. The visions are organized into categories. The vision is marked with the word "new" if Link has not yet seen it and a check mark if he has. The word clear means that Link has already completed that vision's puzzle.

In Skyward Sword, Sheikah Stones look more like the original Gossip Stones than they do in Ocarina of Time 3D. The very first Sheikah Stone in the game appears right next to the Sparring Hall in Skyloft after Link gets the Practice Sword. The Sheikah Stone introduces itself and tells Link the primary purpose of him being there. That one Sheikah Stone is the only one in the game that gives Link visions of his quest, but there are many others. All other Sheikah Stones can be found by playing the Goddess's Harp near a flock of Blessed Butterflies. After Link plays the Harp, a Sheikah Stone pops out of the ground with a Boing-oing! and drops a Treasure on the ground. If Link speaks to it, it gives him advice in words, but not a vision. In the Hero Mode, the first Sheikah Stone gives Link all the visions in their first encounter, without Link having to unlock them throughout the game.

In Cadence of Hyrule, Sheikah Stones have a variety of uses. Interacting with them gives the player the option to switch characters or outfits, and will heal the player and open nearby caves or facilities when used for the first time. Playing the Lute will warp the player to any active Sheikah Stone. As long as the player is not in Permadeath Mode, the stones also serve as a spawn point upon death.