From Zelda Dungeon Wiki
Jump to navigation Jump to search
Want an adless experience? Log in or Create an account.
Song of the Hero 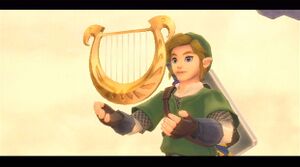 The Song of the Hero is the fifth and final song learned on the Goddess's Harp in Skyward Sword. It is meant to help the goddess's chosen hero, Link, to locate the Triforce and defeat Demise. It is divided into four parts, and Link must gather each one in order to open the portal to the Silent Realm in Skyloft.

Link visits Levias in hopes of garnering a clue about the Triforce. After Link brings some Pumpkin Soup into the Thunderhead and defeats Bilocyte, Levias tells Link that although he doesn't know the exact location of the Triforce, he does have a clue. He instructs Link to gather three parts of the Song of the Hero from each of the three dragons, and then he would sing the final part for Link. Link can collect the pieces in any order, but it is advised to go to Lanayru Desert last, due to a game-breaking glitch that may render a save file unplayable.

When Link first arrives at Faron Woods in search of the piece from the Water Dragon, he is unable to land directly in the woods for some reason and must instead land near the Sealed Temple. If he goes to the Sealed Grounds, he will have to fight The Imprisoned for the third time in the game. It is then revealed that the Faron Woods have been flooded for some reason. Then Groose can use the Groosenator to send Link into the flooded woods, where he can locate Faron, the Water Dragon. She will send Link to fetch Tadtones before she will sing her part of the Song of the Hero.

If Link attempts to go to Eldin Volcano while searching for the Song of the Hero, he will be blown off course while landing and wake up imprisoned and without any of his items except the Goddess's Harp. A Mogma named Plats retrieves Link's Mogma Mitts so that he can dig his way out of the prison. Link must then sneak around the volcano and gather each of his items. He locates the majority of them on the Volcano Summit, including his sword and Fi. After that he can find Eldin, the Fire Dragon, in a cave within the summit area.

In Lanayru Desert, Link can finally crawl through a small hole in Lanayru Caves due to Golo's digging. He will enter a desolate area known as Lanayru Gorge, where nothing but a large pile of bones and some deactivated robots lie. After obtaining a Small Key with the Beetle, Link can access a large cave system with a Timeshift Stone in a minecart, which can then be transported through to the outside. Once the Timeshift Stone settles into a spot in the middle of the gorge, it will spread throughout most of the area and go back in time to when the Thunder Dragon, Lanayru, was still alive. However, the dragon is very sick, so Link takes the Life Tree Seedling and plants it in the Sealed Temple after going through the Gate of Time. Back in his own time, the sapling grows to become a large, thriving tree with a Life Tree Fruit that can heal the Thunder Dragon. Once healed, Lanayru sings his part of the Song of the Hero to Link.

A game-breaking glitch exists in Skyward Sword for Wii during the Lanayru phase of this quest. If Link gets Lanayru's part of the song and speaks to Golo the Goron before collecting the parts from Faron and Eldin, the other segments will not trigger and Link cannot progress.[1]

While a Wii channel was previously made available to repair save data, this ceased to be available to new downloads with the closure of the Wii Shop Channel in January 2019. Consequently, it is strongly advised not to go to Lanayru Province first, and even more strongly not to talk to Golo if the player does so.