From Zelda Dungeon Wiki
Jump to navigation Jump to search
Want an adless experience? Log in or Create an account.
Lanayru Desert 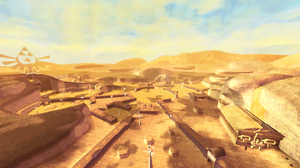 The Lanayru Desert is a large sandy area located within the Lanayru Province in Skyward Sword.

The Lanayru Desert is connected to the Lanayru Mine to the south, the Lanayru Caves to the southwest, and the Temple of Time to the west. In the Temple of Time rests one of the two Gates of Time. There is much sinksand throughout the area, which Link can run across, for a short time. In some areas, there are hidden paths just beneath the sinksand that can be seen with the map. Link may walk on these without fear of being pulled under. There are three power generators throughout the area. After Link activates all three, he is able to access Lanayru Mining Facility in the center of the desert, which is connected to the Temple of Time underground.

In the ancient past, the Lanayru Province was once a life-filled, grassy region. Over time, however, the climate has changed drastically, turning the entire region into a massive desert. It also contained a harbor near the Lanayru Sand Sea, before it dried out and filled with sinksand. In the past, the region was rich in Timeshift Stones, which many Ancient Robots work to mine out of the land as a power source. There are still several scattered about the area, which Link can strike to activate. When activated, they cause the surrounding area to revert to its past time state. While areas are in their past state, many electronic devices have regained power, sinksand changes to solid ground, Ancient Flowers appear, Ampili revert to Ampilus Eggs, and many long-dead enemies return to life. Additionally, Link may speak with Ancient Robots, interact with the new devices or plants to solve puzzles, or reach areas that would be otherwise inaccessible.

Link first arrives in the Lanayru Province while searching for Zelda. When he descends for the first time, he finds himself at the entrance to Lanayru Mine, which leads to the entrance of Lanayru Desert. After passing through, he finds the Temple of Time, but a massive rock slide has blocked the entrance. Link learns from an Ancient Robot that the Temple of Time is connected to Lanayru Mining Facility underground. After finding the entrance and passing through the Facility, he arrives at the Temple of Time. There, he finds Zelda, Impa and the Gate of Time. Before they have a chance to talk, however, Ghirahim appears in an attempt to capture Zelda. Impa holds him back just long enough for Zelda to give Link the Goddess's Harp, and escape through the Gate. Ghirahim finally makes it past Impa, but Link rushes in to buy Impa the time she needs to follow Zelda through the Gate of Time. As she leaves, she tells Link to speak with the old woman at the Sealed Grounds, before passing through the gate and destroying it in the process.