From Zelda Dungeon Wiki
Jump to navigation Jump to search
Want an adless experience? Log in or Create an account.
Ampilus 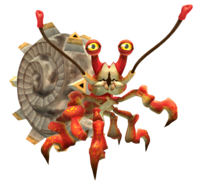 Ampilus are enemies from Skyward Sword.

Ampilus is an unusual crab-like desert-dwelling enemy whose only mode of attack is rolling at Link with its shell electrically charged. On the inside of its hard spiral shell is a soft crab. The simplest way to defeat the Ampilus is by blowing it up with a Bomb. The other way to defeat the Ampilus is to stun it by either shield bashing it or leading it into a wall. Once it is stunned, Link can easily destroy it by hitting it with his Sword. When defeated, it drops 5 Rupees. When surfacing on streaming sink-sand, Link can defeat it and get on top of its shell to reach areas that is incapable to reach when not defeating it first.

When caught in a Timeshift Stone-affected area, Ampilus turn into babies that can only harm Link when he is holding them. The babies give off a periodical electric charge which is used to turn on the power to the nodes.