This article is about the 1989 LCD game. For the 2021 compilation handheld, see Game & Watch: The Legend of Zelda. 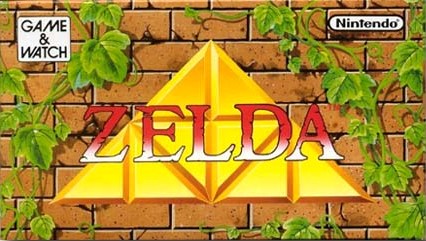 Zelda Game & Watch (ZL-65) is a handheld LCD Zelda game made as part of Nintendo's Game & Watch Multi Screen series. It was developed by Gunpei Yokoi & Nintendo R&D1 and released on August 26, 1989 in North America. Together with the The Legend of Zelda Game Watch, it is one of two dedicated portable LCD Zelda games, and predates Link's Awakening by almost four years.

The Game & Watch Zelda is a side-scrolling action game, possibly inspired by The Adventure of Link. In total, three million Zelda Game & Watch devices were sold.

Zelda Game & Watch was the final game released in Nintendo's Game & Watch Multi Screen series. This series used two screens, and inspired the Nintendo DS. The bottom screen is used for normal battles, to show enemies' energy, to show Link's life and to show an Old Woman that sounds alarm. The top screen is used to show inventory & the map, and as an arena of boss battle.

"The havoc caused by eight fierce dragons is increasing day by day. These dragons have refused to live in peace with man and are fighting against him to rule the world. Now that your sweetheart Princess Zelda has been kidnapped by the evil dragons, you have resolved to destroy the dragons."

Players control Link and fight through labyrinth chambers on the Game & Watch's lower screen. In the labyrinth chambers, Link faces a Goblin and Ghost and/or 1-4 Stalfos. The Stalfos attack Link by thrusting upward at him from below with their swords. Link must move left and right to avoid their attack. Ghosts attack Link from behind with projectiles, requiring Link to occasionally protect himself by holding his shield behind him. Stalfos and Ghosts cannot be defeated and must be dodged and blocked with the shield respectively.

The Goblins attack by stabbing and throwing spears at Link, who must defend himself by using his shield. He must defeat them to proceed to the next room. If Link has the sword beam, available at full health, he can attack them from the far left corner of the chamber. When Link defeats the Goblin, stairs leading to the next chamber will appear. If two stairs appear at the left and right, Link must choose one of the stairs.

Once Link reaches the Dragon's Lair, Link must combat the Dragon. The Dragon will spit out fireballs and attack Link with his tail. Skillfully move left and right to avoid it and attack the Dragon. When Link destroys the Dragon, he will obtain one of the Triforce fragments. The Triforce is the key to unlock the seal that keeps Princess Zelda locked in a "deep dungeon". When all eight dragons are destroyed, Link completes the Triforce and can rescue Princess Zelda. Once the game is beaten, a second round begins with quicker enemies and harder bosses. The player's score from the previous game also is carried over.

After completing the second round, the game will loop, allowing the player to continuously beat subsequent rounds for an increased score. The score will roll over at 9990, and a sword icon will appear above the heart containers, representing 10,000 points. Holding down the continue button will show the highest score achieved on the device.

A Mini Classics keychain Zelda Game & Watch was released in 1998 by Toymax Inc. as part of a series of licensed rereleases. It has a significantly smaller screen size, and was only released in North America.

In October 2002, Nintendo included a port of Zelda Game & Watch as an unlockable game in Game & Watch Gallery 4 for the Game Boy Advance. To unlock this game, the player must beat all other included games and earn at least 160 stars.[1]. As a bonus game, it does not have a "modern" version with updated graphics, and is accessed through the Gallery's "Museum" rather than the main "Game" menu. The height of the non-playing screen is reduced to fit on the GBA screen.

In April 2011, a playable online version was created by website Pica Pic, a site specializing in recreating classic LCD handheld games in Adobe Flash. With Flash's deprecation, it is no longer playable in modern browsers.