From Zelda Dungeon Wiki
Jump to navigation Jump to search
Want an adless experience? Log in or Create an account.
Stalfos 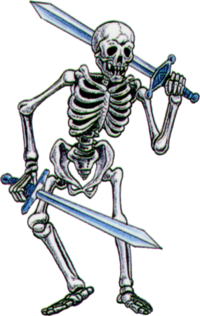 The original appearance of the Stalfos is probably actually the easiest version to defeat as well. They are found right away in Level 1, they deal a half a heart of damage, and only take a few slashes to defeat. They wield two swords and often have keys embedded into their ribcage.[1][2] In the Second Quest, Stalfos shoot a beam sword, similar to that of Link's sword beam.

The Stalfos of this game are armed with a sword and shield with no armor. They come in two colors, red and blue, blue being the stronger of the two. The red Stalfos attack simply by swinging their sword and can be defeated by a sword slash while crouching. The blue Stalfos has the same attack, but can also jump and down-thrust in mid-jump. Link defeats them the same way as he would a red Stalfos.

Stalfos in A Link to the Past come in multiple variations and colors. Smaller Stalfos come in both Red and Blue and jump away from Link when he draws near. Some of these Stalfos toss bones toward Link if he strikes to attack them. The second type comes in the form of Stalfos Knights. These skeletons are significantly larger and first appear within the Ice Palace.

A change to the usual Stalfos, the type that appears in Link's Awakening wields no sword and prefers to jump or throw bone-like projectiles at Link. They come in two variants: A Green Stalfos and Orange Stalfos.

These skeletal enemies slowly travel around the room, ready for battle. When Link approaches a Green Stalfos, it launches itself into the air and tries to stomp down on him. Quickly dodge their stomp attacks by moving away, then turn around and try to attack swiftly with the Sword. Spin Attacks may be useful when trying to defeat this Stalfos.

Orange Stalfos wander the room like the green variety, but instead of jumping on Link, they jump away from him. When it lands, it throws a bone club at Link. Be ready to avoid its club since it is one of the few projectiles that can travel diagonally. Attacking from a distance may be a good idea when fighting an Orange Stalfos. 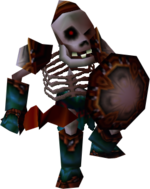 These skeletal warriors make their return from previous Zelda titles. Watch out for their jump attack, which can do a great deal more damage to Link than their regular sword attacks. Use Z-targeting to get close while using the Shield, then take a quick stab as soon as Link sees them let their shield down. Try to circle around them when they jump at Link. Also, if Link gets right in their face, he can easily "force them" to attack and get a quick stab in. If done right, Link can take them out very quickly this way. They are found in the Forest Temple, the Water Temple, the Shadow Temple, the Spirit Temple, and in Ganon's Castle.

Many of their sword techniques mimic Link's (i.e. the Jump Attack). This enemy can be prevented from jumping at Link with a sword slash by keeping the Shield up, holding Z and keeping as close to it as possible because it may jump and mid-air slash at Link if he is too far away.

A superstition exists with the Kokiri where if any adult becomes lost in the Lost Woods, they turn into one of these creatures. This supposedly happens to the Master Craftsman's Son in the Trading Sequence when Fado gives Link the Poacher's Saw.

Only two Stalfos appear within the game as Mini-bosses. They are Igos du Ikana's lackeys. [3]

The Stalfos here appear in the same fashion as they did in Link's Awakening.

In The Minish Cap, Stalfos are found in red and blue varieties. The blue Stalfos walk toward Link and hop away when he swings the Sword at them. They can be defeated by cornering them and slashing at them or forcing them to jump down a hole. Red Stalfos usually stand a distance away from Link and hurl bones at him. They can be defeated by simply slashing them. An effective way to defeat Stalfos in The Minish Cap is to use the Cane of Pacci or the Gust Jar to suck or flip their heads off. 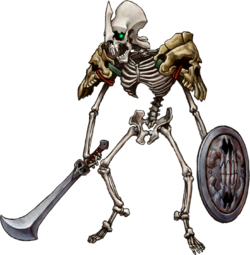 In Twilight Princess, Stalfos are skeletons that wield a sword, shield, and minor armor, much like they did in Ocarina of Time. They can be found in the Arbiter's Grounds. In order to take them out, Link must first defeat them in a sword fight, then bomb their remains that they crumble into once he has hit them enough times. One good strategy for taking out multiple Stalfos simultaneously is to simply to fire Bomb Arrows at them from afar to instantly defeat them. Alternatively, Link can strike these enemies with the Ball and Chain to instantly defeat them.

The Stalfos that appear in Phantom Hourglass appear as a collection of bones on the ground. Once Link draws near, the bones form a skeleton enemy and begin to throw bones toward Link. Stalfos are quite agile and jump away if Link tries to strike them with the Sword. Use the Jump Attack with the Sword. Alternatively, the Grappling Hook, Bombs, and the Boomerang work wonders against these boney foes. There is also another variety that wears hats, uses a sword, and is much more difficult to deal with. The Hammer also dispatches Stalfos in one hit.

These Stalfos have the same design as they did in Phantom Hourglass. The Stalfos that wield swords also return, now called Stalfos Warrior. Occasionally, they drop Stalfos Skulls when defeated. 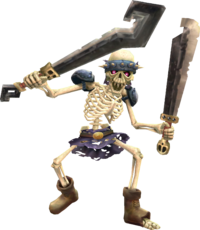 Stalfos have three main attacks. They quickly swing one sword horizontally, perform a cross-chop with both swords, or raise both swords above its head in preparation for a powerful two-part attack. The Stalfos is defenseless while its swords are above its head, so this is Link's chance to run around behind it and slash away. There is also a more powerful version of Stalfos with four arms and more life called Stalmaster.

A Stalfos is the Mini-Boss of Skyview Temple. When Link returns for the Sacred Water, three appear in the room where he fought Ghirahim.

Stalfos return with a more traditional style of combat. Stalfos attempt to dodge a slash attack by jumping away from Link. If Link follows and slashes again fast enough, he lands a hit and can then move on to attack. If too slow, Stalfos jump away, and if Link makes no attempt to follow Stalfos, they attack by throwing bones at him. They return in two colors, but are the same in terms of combat style, simply dealing more damage and having more health. It is advised to attack with ranged items as they deal good amounts of damage and Stalfos rarely dodge item attacks, though some items (such as the Hookshot) have no effect. A Stalfos can be uncovered by setting a Gibdo on fire to burn its bandages off.

These skeleton creatures wield two swords and will try to walk right up to Link, and slash at him with them. The attacks are incredibly slow and are very weak, making the Stalfos one of simplest enemies to defeat in the game. While they don't really travel in packs too often, they do tend to re-spawn. Link just needs to slash his sword once at the Stalfos and it will be defeated. Stalfos will almost always leave a single red ruby behind as a reward. They can be found in Goronu and Lupay.

Stalfos can be found patrolling the area of Sakado and Gohiyan Ship. They look like and act the same as they did in The Faces of Evil.