From Zelda Dungeon Wiki
(Redirected from Chuchu)
Jump to navigation Jump to search
Want an adless experience? Log in or Create an account.
ChuChu 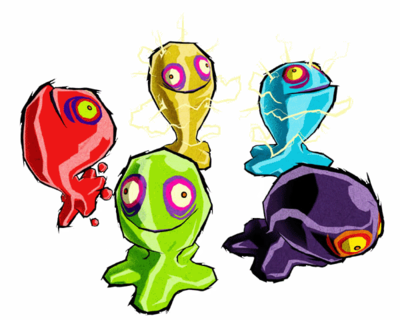 ChuChus are recurring enemies in The Legend of Zelda series. Similar enemies, called Chus, appear in Twilight Princess. They come in many different colors and each color has its own special features and characteristics.

Majora's Mask is the first game to feature ChuChu. They first make their appearance relatively near the start of the game in Termina Field. There is a total of four different colored ChuChu in Majora's Mask. All four types of ChuChu have the same general design and each contains an item which is released when the ChuChu is defeated (except blue).

ChuChu are blob-shaped in Majora's Mask and they have large bottoms but begin to narrow toward their eyes. They have a large mouth with pale lips and teeth that have gaps in between them. They also have two large, yellow eyes. They all have droopy eyelids with a number of wrinkles and lines on them. They are translucent monsters and when looking through them Link can see the item which their body contains, except Blue ChuChu that do not contain an item.

ChuChu attack by hopping around and jumping into Link. However, they are easily defeated with one or two hits with the sword. The four colors of ChuChu in Majora's Mask are as follows: Blue ChuChu, Green ChuChu, Red ChuChu and Yellow ChuChu.

ChuChus in The Wind Waker have a different appearance than their Majora's Mask counterparts. They are skinny lower down, but their head is wider. They are similar in appearance to a half inflated balloon.

These ChuChu share many characteristics with Buzz Blobs from past Zelda games.

Like their previous counterparts, they come in multiple variations, and are easily defeated.

The first ChuChus encountered in The Wind Waker are red ChuChus in Dragon Roost Cavern. These ChuChus will lunge at Link and deal a quarter heart of damage if contact is made with them. Once defeated, they will occasionally drop Red Chu Jelly, which can be converted into a potion to refill Link's hearts.

Green ChuChus follow the same pattern as the Red ChuChus. The primary difference is the fact they can turn into a puddle and prevent Link from slaying them easily as the common Red ChuChus.

Blue ChuChus are an extremely rare, electrified, form of ChuChu, with only 23 existing in the entire Great Sea. They give out Blue Chu Jelly when defeated, but only the first time they are defeated. If Link gives the Blue Chu Jelly to Doc Bandam, he will create the Blue Potion.

Yellow ChuChus appear as little orange electrified blobs, found in the Tower of the Gods and the Savage Labyrinth. They can drop either Green or Red Chu Jelly, but also drop Rupees, bombs, arrows etc.

Dark ChuChus are the last variant of ChuChu. They are invulnerable to all Link's weapons, except the Mirror Shield which can reflect light on them, turning them to stone and leaving them vulnerable to the Skull Hammer. They can also be dropped on switches in order to solve certain puzzles. They are found in the Earth Temple, Savage Labyrinth, and Ganon's Tower.

In The Minish Cap, Chuchus can be found throughout Hyrule and within most dungeons. Green ones appear first in Minish Woods, red ones first appear on Mt. Crenel with more health than green, and Blue ones are rarer than the others, having an electric charge preventing use of direct attacks. The electric charge turns off occasionally, but ranged attacks make light work of all Chuchu variants.

In Phantom Hourglass, ChuChus are very similar in appearance to The Wind Waker ChuChus. They come in five varieties. Their primary atttack is contact, and sometime they jump toward Link.

Red ChuChus are the most basic. Helmet ChuChus are Red ChuChus with a rock helmet on; they hide inside rocks, and when Link approaches or tries to grab the rock, they break out, keeping part of the rock as a helmet. Using bombs to break their helmet and then slashing with the sword is the most common method of dealing with them, although when Link gets the Grappling Hook, it can be used to rid them of their helmet as well.

Yellow ChuChus are electrified, and must be attacked only when they stop being so, unless a ranged weapon is used. The Boomerang will stun them, all other ranged weapons will defeat them. If Link touches them or hit them with his sword when they are electrified, Link will be shocked and his map will be in pixelated form for some time.

Blue ChuChus are just like yellow ChuChus, but stay electrified forever. The Boomerang will stun them, all other ranged weapons will defeat them.

Found primarily in the Temple of Courage, Green ChuChus are unique, because the have the ability to squash themselves down into a green puddle, thus evading most of Link's attacks. It is possible to defeat them with the sword, however, it is very hard. Because they can take some time to defeat, their jump attack often lands at least a couple of times, and they can be very annoying. Using a ranged attack is recommended, as they will seldom dodge it.

Red ChuChus are often found in the Forest Realm. Yellow ChuChu also appear and are covered in electricity. Blue ChuChu are near invincible and require the Bow of Light to slay. This game debuts the Ice ChuChu and Helmet ChuChu.

In Skyward Sword, Chuchus appear in four variations: Green ChuChu, Red ChuChu, Blue ChuChu, and Yellow ChuChu. They will crawl toward Link and try to absorb him (if they are large enough), which will cause Link to take damage should he remain inside them long enough. When hit with a sword, they will split into two smaller Chuchus. These smaller ones will attach themselves to Link, slowing his movements, as well as inflicting damage should they stick to him long enough. If left alone, two smaller Chuchus will merge. 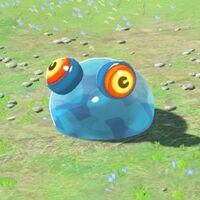 In Breath of the Wild, there are many variations of the Chuchu. They tend to spawn in groups of three, and come in three different sizes, small with 3 HP, medium with 20 HP and large with 48 HP, but all three have the same basic attack patterns. They will jump toward Link in an offensive manner, and deal damage on contact, as has been the norm with past Zelda games. The regular Chuchus will drop Chuchu Jelly when defeated, and depending on its size, it may drop from 1 to 5 Jellies. Their critical points are their eyes, and they can be momentarily stunned when shot on them with arrows. In spite of being composed of mostly water, Chuchus can drown if they jump into water bodies like lakes and rivers.

The Fire Chuchu makes its home in the Eldin region of the game, and Link is most likely going to come into contact with one whilst scaling Death Mountain. If one comes into contact with Link, it will set him alight if ill-prepared, which can cause his equipment to burn. This type of Chuchu will drop Red Chuchu Jelly on death.

The Electric Chuchu can be found in areas such as the Gerudo Desert or in the dense forests of the Faron region. Direct contact with fully metal weapons, such as the Soldier's Broadsword, will result in Link taking an electric shock if the Chuchu is surged with power. They will explode in a ball of electricity once defeated, along with dropping Yellow Chuchu Jelly.

Chuchu in Age of Calamity appear in similar fashion as their Breath of the Wild counterparts. These weaker enemies are encountered in the first scenario, The Battle of Hyrule Field, and can be taken out with a single attack. They will occasionally drop Chuchu Jelly as a reward when defeated. After each Chuchu is defeated, the player will receive a Chuchu Trophy, which can be used to complete quests or upgrade weapons of the various warriors.

Elemental variants of Chuchu are very common, with their being Ice Chuchu, Fire Chuchu, and Electrical Chuchu, often in locations with other similar elemental based enemies.

In Battle Quest, ChuChus come in two forms, their Red and Green forms. Swordsmen can defeat a Red ChuChu with one simple sword slash, and archers with one arrow. The Green ChuChu which appear only in the Extra Quests are more evasive, having the ability to fall to the ground and avoid attacks. However, they can be defeated with a well-timed sword slash or arrow as they are standing back up.