From Zelda Dungeon Wiki
Jump to navigation Jump to search
Want an adless experience? Log in or Create an account.
Stone Talus (Rare) 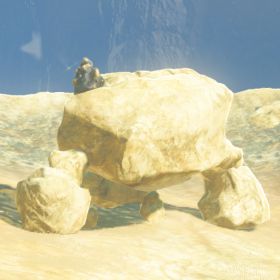 Stone Talus (Rare) are bosses that appear in Breath of the Wild and Age of Calamity.

The Stone Talus (Rare) is one of the many overworld bosses found in Breath of the Wild. It disguises itself in the ground as a collection of rocks, and the boss forms as Link draws near.

The Ore Deposit situated on the Talus' body will occasionally drop some of its loot when struck. This includes precious gemstones from Diamonds to Opals, or basic stones such as Flint. Upon death, the Talus will drop many gemstones, including the aforementioned. These Taluses are the richest source of ore in the game, the caveat being their scarcity.

In Age of Calamity, Stone Talus (Rare) appear and fight almost identically as their Stone Talus counterparts. They may drop rare gems as rewards, including Opal, Topaz, Sapphire, Ruby, or Diamond. After each Stone Talus is defeated, the player will receive a Stone Talus Trophy. These can be used to complete quests or upgrade weapons of the various warriors.