From Zelda Dungeon Wiki
Jump to navigation Jump to search
Want an adless experience? Log in or Create an account.
Stone Talus Trophy 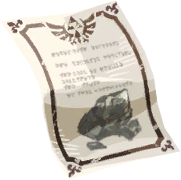 "A battle honor awarded by the royal family in recognition of defeating a number of monsters. Words praising the heroic efforts of the recipient are emblazoned on it."

A Stone Talus Trophy is a material found in Age of Calamity It is a reward given by defeating a Stone Talus, Igneo Talus, and Frost Talus.