From Zelda Dungeon Wiki
Jump to navigation Jump to search
Want an adless experience? Log in or Create an account.
Stone Talus 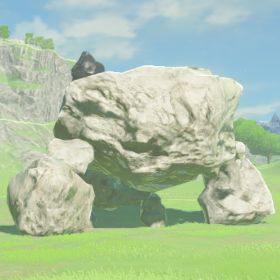 Stone Talus are sub-bosses in Breath of the Wild and Age of Calamity.

The Stone Talus has simple but strong melee attacks, easy to avoid due to their obvious telegraph and the Talus' generally slow speed. It rears back to swing hard with its left arm or pounds Link into the ground with its right arm (Melee punch

). At range, the Stone Talus will throw one of its arms (Boulder throw

), towards Link, losing the arm in the process. Once it loses both arms, it will slam one side down to replenish its arm, then the other. At this point, and at any time when the Stone Talus' body is at ground level, Link has a window of opportunity to climb atop the Stone Talus.

When atop the Stone Talus, Link should equip a strong two-handed weapon and use his charged spin attack to deal maximum damage. Link should be careful not to fall from the Stone Talus during his attack, as it will continue to move around for a few moments and Link may slip off due to the changing slopes. The Stone Talus will only put up with the player's mounted presence for a few strikes before shuddering and throwing Link off, damaging him in the process (Thrown from top of body

In Age of Calamity, Stone Talus take on a similar appearance as their Breath of the Wild counterparts, appearing in normal, Luminous, and Rare variants. The gems that are on top of the talus once again serve as the enemies weak point and hits to these gems will cause their energy gauge to deplete. Normal attacks will deal more minimal damage, but a special attack can leave a Stone Talus stunned momentarily. This can allow the warrior to leap up onto the Talus body and deliver direct strikes to its gems.

An Igneo Talus is actually the first talus encountered in the game, appearing during the Daruk, the Goron Hero. A pair of traditional Stone Talus appear as the final boss during The Road Home, Besieged scenario.

Stone Talus often drop rare gems as rewards, including Flint, Amber, Opal, and Ruby. After each Stone Talus is defeated, the player will receive a Stone Talus Trophy. These can be used to complete quests or upgrade weapons of the various warriors.