From Zelda Dungeon Wiki
Jump to navigation Jump to search
Want an adless experience? Log in or Create an account.
Deya Lake 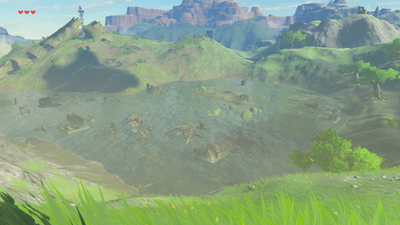 Deya Lake is a location found in Breath of the Wild and Age of Calamity. It sits east of the Hylia River, south of the Squabble River, and just southwest of the Dueling Peaks Tower.

Deya Village sits on the lake as a fishing community, where fish are caught fresh from the lake and use to make delicious meals. One of these is the Deya Hot Pot, which uses several types of fish from the lake, including Hearty Bass, Mighty Porgy, and Armored Porgy.

Just southwest of the Lake, there are some ruins that are guarded by a Bokoblin. In the well of the ruins, there is a treasure chest that contains an Opal gem.

The south end of the Deya Lake is watched over by a Fire Wizzrobe who is wielding a Meteor Rod. At the southeast of the lake, up on the higher elevation, there is a Bokoblin camp with some more dangerous Blue Bokoblin and Black Bokoblin. There is a treasure chest in the well at the camp and it contains a Soldier's Spear.

Throughout the Lake there are some broken down wagons that can be examined to find some Amber gems. There are a few treasure chests that are located at the main part of the Lake.

As part of the Breath of the Wild Expansion Pass DLC, Misko's EX Journal 2 will appear at the Deya Village Ruins, found in the wreckage of one of the buildings at the east side of the Lake.

Remove apples from the tree on the left until it looks like the two on the right.

One of these things is not like the others. Carefully pick up apples from the tree on the left until it looks similar to the two on the right. 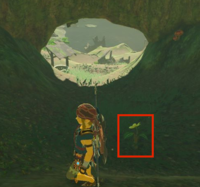 The flower trail starts in the stump to the west.

Follow the flower trail starting in the stump to the west. 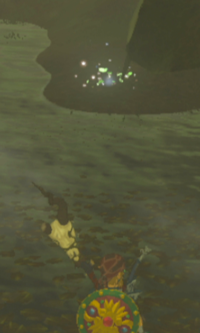 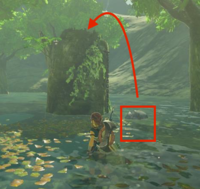 Use Magnesis to move the chained rock into the stump.

Use Magnesis to move the chained rock into the stump.

Solve the block puzzle. The block is in the nearby tree.

Use Magnesis to lift the block out of the tree and solve the puzzle in the rock face.