From Zelda Dungeon Wiki
Jump to navigation Jump to search
Want an adless experience? Log in or Create an account.
Misko's EX Journal 2 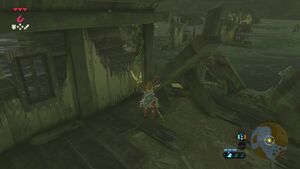 Misko's EX Journal 2 is an object from Breath of the Wild.

The journal was included as part of The Champions' Ballad DLC. The Journal can be found in the Deya Village Ruins, located on the east side of the Lake in a rundown shack. There are hints in the journal about finding several pieces of Armor that are scattered about throughout Hyrule. This advances many of the Side Quests that were including as part of the Champions' Ballad DLC.

The journal hints that Ravio's Hood can be found at the Spring of Courage at Dracozu Lake. It is located in the right hand of the dragon, of which the Spirit of Courage is built around the ruins of a large dragon structure.

The Island Lobster Shirt can be found at the start of the Menoat River. The River begins at the Cora Lake, found just south of the Lake Tower.

Zant's Helmet can be found in Tobio's Hollow, located just south of the Dueling Peaks. The treasure chest is hidden in the poisonous swamp at the north end of the region.

I had the six priceless relics I stole from Hyrule Castle in treasure chests... I shall write down their locations. -Misko

The traveling merchant's hood is in the right hand of the dragon that consumes the Spring of Courage at Dracozu Lake.

The blue garb of the hero who controlled the wind and traveled the ocean is where the Menoat River was born.

The helm of the self-proclaimed King of Shadows is in the swamp of the valley of dead trees, south of Dueling Peaks.

The evil spirit's armor set is hidden within Faron's sea of trees.

Find these pieces at the highest of three waterfalls north of Lake Floria...

at the bridge between small waterfalls over Floria River...

and at the broken stone bird of Ebara Forest.