From Zelda Dungeon Wiki
Jump to navigation Jump to search
Want an adless experience? Log in or Create an account.
Misko's EX Journal 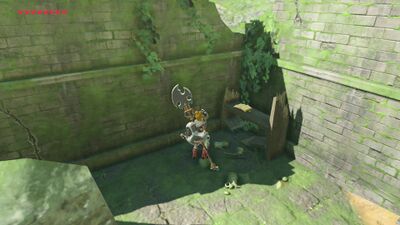 Misko's EX Journal is a Book from Breath of the Wild. The book was added as part of The Master Trials downloadable content. The book can be found in the southernmost building of the Outpost Ruins. When read it will advance several side quests, including EX Treasure: Ancient Mask, EX Treasure: Fairy Clothes, EX Treasure: Twilight Relic, and EX Treasure: Phantasma.

I hid eight priceless relics I stole from Hyrule Castle in treasure chests... I shall write down their locations. -Misko

The ancient mask lies at the ruins where soldiers gathered. From there, the waters of Lake Kolomo are visible.

The green garments of the man who wished to be a fairy are hidden in the ruins of Hyrule Field. Find these pieces at the ruins where trade flourished... at the ruins where sinners were imprisoned... and at the village ruins next to farmland where many people once gathered.

The princess of twilight, whose stories are handed down alongside those of the Hero of Twilight... Her helmet can be found at the temple ruins soaked in the waters of Regencia River.

Armor worn by fierce phantoms feared even by heroes, is hidden in the ruins of Hyrule Field. Find these pieces at a battleground, where brave souls tested their skill... at ceremonial grounds where royal guards are honored... and at the ruins where the soldiers of Hyrule gathered.

"EX" is all that's written on the last page. What could it mean?

This item can be found where Lake Kolomo is visible, which is a reference to the Kolomo Garrison Ruins. The mask is found in the largest part of the ruins, and requires Magnesis to pull the chest out of the ground.

There are three items in this quest that makeup the Tingle Set. Each of the three hints leads Link to three different ruins found in Hyrule Field.

The journal guides Link towards the temple ruins soaked in the water of Regencia River. This is in reference to the Sage Temple Ruins, located just northwest of the Central Tower. The area is defended by some Lizalfos that shoot Shock Arrows. At the west end, there is a pile of stones with a treasure chest buried underneath. Link can use Magnesis to pull it up and acquire Midna's Helmet.

There are three items in this quest that makeup the Phantom Set. Each of the three hints leads Link to three locations in Hyrule Field.