From Zelda Dungeon Wiki
Jump to navigation Jump to search
Want an adless experience? Log in or Create an account.
Lizalfos 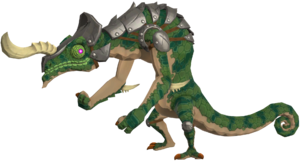 Lizalfos as seen in Breath of the Wild

Lizalfos are recurring enemies in The Legend of Zelda series. They are usually experts at combat and sometimes even have body armor.

Lizalfos in The Adventure of Link are large armor-clad hulks whose behavior is nearly identical to Iron Knuckles, charging at Link and attacking with spear and mace. Orange and Red Lizalfos are primarily encountered in the forests of Eastern Hyrule around Kasuto and the Hidden Town of Kasuto, though Link first comes across the beasts on Maze Island in the cave where the Kidnapped Child is being held. The more dangerous blue variety are exclusive to the Valley of Death and attack by hurling maces at Link that can only be repelled with an active Reflect Spell. On the path south from Nabooru, Link also comes under attack from rock-throwing Red Lizalfos that sit high atop walls and are unreachable, even with the Jump Spell equipped. They can be destroyed, but by casting Spell or Thunder. Orange, Red, and Blue Lizalfos yield 150, 100, and 200 experience, respectively. Rock-throwing Lizalfos give 50 experience.

Lizalfos in Ocarina of Time have little armor, and are very agile. They are not a very common enemy, and are not very powerful either. Link first encounters this enemy in Dodongo's Cavern, with Lizalfos serving as the mini-bosses of that dungeon. The best way for Link to defeat them is to use a shield to block their attack causing the Lizalfos to lose its footing for a short period of time allowing Link to strike. The Lizalfos can leap over attacks and usually run away to another platform after taking two strikes. Even when there are multiple Lizalfos, they will not attack Link at the same time, instead, they will run away, alternating which Lizalfos is attacking Link at any given time. Deku Nuts may stun them for a short period of time allowing Link a window in which he can strike them with the sword.

Lizalfos in Twilight Princess are much different than in Ocarina of Time. Link first encounters them in the Lakebed Temple, with the enemy having barely any body armor and a pitiful shield. The Shield Attack and Back Slice are very effective strategies to defeat them, in addition to a later Hidden Skill, the Helm Splitter. After the Master Sword is obtained, they are among the more plentiful enemies in the game.

Lizalfos in Skyward Sword resemble lizards with human-like attributes. They wield stone gauntlets, which they can use to block Link's attacks. These Lizalfos have a very defensive attack strategy. They normally dodge out of the way of any attack tried with the sword unless they are taunting Link. When taunting, they protect themselves with the stone gauntlet. If Link's sword hits the gauntlet, they immediately attack with their tail. They can also breathe fire to damage Link. Directional slashes are necessary to hit this enemy, followed by crazed sword slashes. They take 9 hits with the Goddess Sword.

Found in the Fire Sanctuary, Dark Lizalfos exhibit the same behavior as normal Lizalfos except they are faster and breath dark smoke which curses Link, making him unable to draw the sword or use any items for a short amount of time. 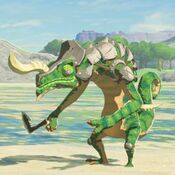 Lizalfos in Breath of the Wild have adapted to their environment by being able to camouflage in with their surroundings, even adhering to walls. They use this new ability to ambush an unsuspecting Link. Using a bow is among one of the most reliable strategies to defeat them, as one or two shots to their heads will take them out. There are many different types of Lizalfos in Breath of the Wild, such as the standard Green Lizalfos, or Fire-Breath Lizalfos; with 10 distinct types, they're the enemies in the game with the most variations. If meat is dropped on the ground in front of them, they will pick it up and eat it, restoring 100 percent of their health.

Lizalfos in Breath of the Wild are based upon chameleons, sharing their ability to change colors and extensible tongues, as well as a passing resemblance to species such as Jackson's chameleon. Unlike chameleons, aside from bipedalism, Lizalfos are tremendously fast and swift creatures, to the point that they can keep up with a horse at full canter.

Lizalfos in the game are shown to be markedly intelligent (considerably more than Bokoblins and Moblins), and are shown to have conversations in their rudimentary language, as well as being well-versed in sophisticated metallurgy for armor and weapon making. Lizalfos neither make nor wield two-handed weapons.

A slightly stronger variant of the Green Lizalfos. Often seen wielding reinforced lizal-weapons, such as Lizal Forked Boomerangs or Strengthened Lizal Bows. Upon death, they may drop a Lizalfos Tail.

Even more powerful than the Blue variant, these Lizalfos are usually the leader of their pack. They attack quicker, and carry stronger weapons, including the Lizal Tri-Boomerang. 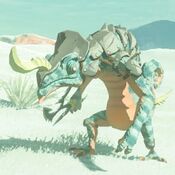 This variant of Lizalfos appears primarily in hot regions of the game, such as on Death Mountain. They act in a very similar way to regular Lizalfos, but have a new ability; being able to breathe fire. Link can avoid taking damage here by holding out his shield, or, if he has all three pieces of the Flamebreaker Outfit equipped and enhanced at least twice, the fire will deal no damage at all. Upon death, the Fire-Breath Lizalfos will drop a Red Lizalfos Tail, in addition to some miscellaneous Lizalfos items.

Often found in the coldest regions of the game, these Lizalfos have the unique ability to spit out many icy balls at will. If these balls come into contact with Link, they will freeze him, and leave him vulnerable to other attacks. Upon death, they will drop an Icy Lizalfos Tail. To defeat an Ice-Breath Lizalfos, simply strike them with a fire weapon or shoot a fire arrow at them - on doing this, they will evaporate into steam.

Electric Lizalfos are typically found in the Gerudo Desert, where they lie in wait beneath the sand before jumping out to ambush Link. They can create a dome of electricity at will, which can force Link to drop his metal equipment. They will drop a Yellow Lizalfos Tail when they are taken out. 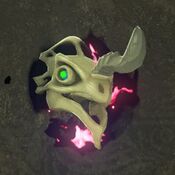 These are the most powerful versions of the Lizalfos in the regular mode of the game. They are much more aggressive than any other versions, and have faster attacking speed, especially with bows. They can carry elemental arrows, and have significantly more health than weaker variants. Upon death, they can drop rare materials such as Sapphire or Topaz, as well as an assortment of Lizalfos goods.

Golden Lizalfos are found exclusively in Master Mode, and have more health than their silver counterparts, though they carry the same weapons and drop the same items.

This variant of Lizalfos only appears at night, and behaves very similarly to creatures such as Stalchildren from previous games. They only have 1 HP, but when struck, their heads will drop to the ground, and will need to be destroyed in order to be fully rid of Stalizalfos. They often appear in groups of 2 or 3.

The Cursed Lizalfos only appears in areas tainted by the Malice of Calamity Ganon. They appear identical to the heads of Stalizalfos, though they are engulfed in a dark aura. They tend to spawn from a certain area of Malice, so destroying the source will prevent them from appearing.

Lizalfos in Age of Calamity are some of the weakest enemies, first encountered in The Battle of Hyrule Field scenario. They will occasionally drop a Lizalfos Horn or Lizalfos Talon when defeated. After each Lizalfos is defeated, the player will receive a Lizalfos Trophy, which can be used to complete quests or upgrade weapons of the various warriors.