From Zelda Dungeon Wiki
Jump to navigation Jump to search
Want an adless experience? Log in or Create an account.
Malice 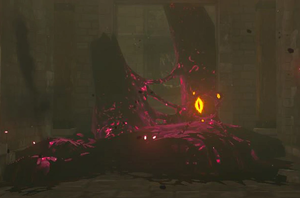 A Malice pool with columns and an eyeball

Malice is an enemy substance and obstacle in Breath of the Wild and Age of Calamity. It is a black and magenta substance found throughout the four dungeons of the Divine Beasts, Hyrule Castle, and various assorted locations across Hyrule.

Touching the substance will unavoidably damage Link. Small eyeballs can also appear with the corruption; particularly within the dungeons. Destroying the eyeballs will remove the immediately surrounding Malice. These eyeballs can be destroyed by using melee weapons, arrows, or remote bombs. However, the eyes can only be killed when they are open. These eyes cannot be added to the Hyrule Compendium.

The substance is generally idle and has a gelatinous appearance and consistency, pitting under Link's weight; however, whenever columns of it are shown, these are solid constructs that Link can only avoid by climbing around those. The nearby presence of malice generally is indicated by a cavernous croaking sound.

Cursed heads of Stalkoblins, Stalizalfos and Stalmoblins can appear from areas of Malice that have maws in them, which have a total of 30 health each, and unlike the eyeballs, these monsters can be added to the Hyrule Compendium, and will repeatedly respawn until the particular section of Malice is destroyed by attacking the eyeball.

Malice is also shown to afflict more innocent creatures and elemental deities, as Naydra the ice dragon falls victim to being possessed by the Malice before Link encounters it and sets it free from its control. Neither Farosh nor Dinraal have been affected by the substance at all.

However, this can only be achieved where available. Places across Hyrule which are blighted with pools of Malice will be found (like the Coliseum Ruins), but it may well be irremovable.

The flat black fringes of Malice pools can be stepped on without damage but touching the solid mass will incur in damage.

Malice is considerably more widespread in Age of Calamity, though it's treated more as an obstacle than actually damaging to the player's characters. Albeit removing pools of Malice is also made by destroying malice eyeballs, this also requires previous defeating of powerful monsters, most commonly Lynels.

Malice also blights monsters and guardians even further than in Breath of the Wild, creating powerful Malice versions of those like Malice Lynels and Malice Guardians.

Ganon's abilities and attacks in the game consist of him creating pools and weapons out of malice.