From Zelda Dungeon Wiki
Jump to navigation Jump to search
Want an adless experience? Log in or Create an account.
Tabantha Tower 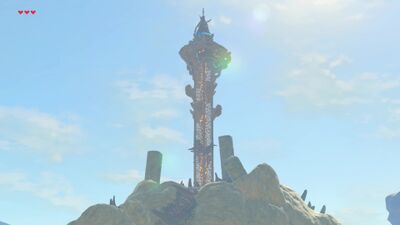 Tabantha Tower is a Sheikah Tower within Breath of the Wild. Cold resistance lvl 1 recommended. You may need both pillars to climb up.

It is located in the northwest region of the world, just south of the Hebra Tower region. It is also the region in which the Rito reside and live.

The actual tower is surrounded by Malice and is patrolled by numerous strong enemies include Black Bokoblin, Black Moblin, and Black Lizalfos. There are Malice Eyeballs found through the Nero Hill that lead up to the Tabantha Tower. In order to reach the top of the tower, Link will need to climb the pillar located just to the west. From there, he can shoot the Malice Eyeball near the pillar to the north, causing it to fall up against the tower. Link can then climb the fallen tower and reach the top of the tower.

Breath of the Wild Sheikah Towers[edit][hide][show]
Retrieved from "https://www.zeldadungeon.net/wiki/index.php?title=Tabantha_Tower&oldid=433094"
Category: