"The Ancient Columns stand above the southernmost cliff in the Tabantha Frontier. There are several stone columns engraved with reliefs, but adventurers, beware: this area is patrolled by monsters. Toward the rear is an ancient shrine that Princess Zelda investigated over a hundred years ago." 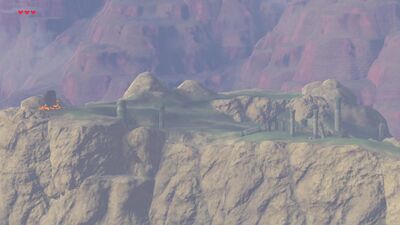 The Ancient Columns are a location in Breath of the Wild.

The Ancient Columns are located just west of the Tabantha Great Bridge and south of Piper Ridge. The Columns overlook the Tanagar Canyon to the south and east. Link can climb up to the Ancient Columns by first climbing up to the Rayne Highlands to the west.

The area has a pair of Black Moblin that are paroling the region. There are also some Maraudo Wolves in the region.

There is some deep water in the center of the area with a circle of lilies. If Link drops in the circle, he can get a Korok Seed. At the west side of the area, there is a pillar with a stump on it. Step on it and then race to the yellow circle that appears above the pillar to the southwest. Reach it in time to find another Korok.

The Tena Ko'sah Shrine is located at the east end of the Ancient Columns. It is A Major Test of Strength shrine and the Guardian Scout IV wields a Ancient Battle Axe++, Guardian Sword++, and a Guardian Shield++. Link can find a Knight's Halberd in the treasure chest before talking to Tena Ko'sah at the alter to get a Spirit Orb. 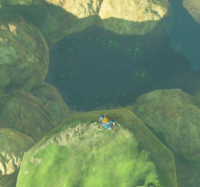 Dive into the circle of water lilies.

Dive jump or fall into the circle. 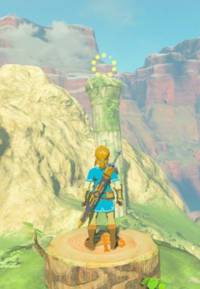 Race from a lower pillar just to the north-northeast to this high pillar.

The seed platform is on a smaller pillar to the north-northeast. Race to the ring.