From Zelda Dungeon Wiki
Jump to navigation Jump to search
Want an adless experience? Log in or Create an account.
Hebra Tower 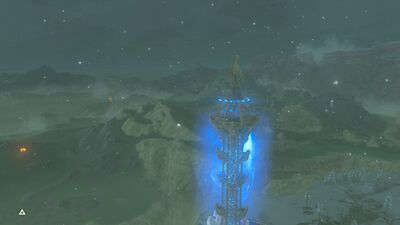 Hebra Tower is a Sheikah Tower within Breath of the Wild. It is located in Hebra, in the most north-westerly corner of Hyrule; north of the Tabantha Tower and Ridgeland Tower regions and west of the Woodland Tower region.

The tower's travel gate faces Southeast, opposite to the Kopeeki Drifts, Hebra Falls and the Hebra Headspring.

Access to the tower, and the Hebra and Tabantha provinces at large, require cold protection either from elixirs or from wearing armor. The Snowquill Set can be purchased at Rito Village in the neighboring Tabantha Tower Region.

The tower is located on top of a small hill between the road and Tanagar Canyon, which is guarded from the southwest by a monster encampment at the Tabantha Village Ruins. Its bottom is surrounded by various blocks of ice that impede Link from accessing it. These can be melted by using fire, or by using Revali's Gale to avoid those. None of said ice blocks contain any loot.

There are no towns or major settlements in this tower region, nor there are any plot-relevant quests associated to it, other than side quests.

Breath of the Wild Sheikah Towers[edit][hide][show]
Retrieved from "https://www.zeldadungeon.net/wiki/index.php?title=Hebra_Tower&oldid=433126"
Category: