From Zelda Dungeon Wiki
Jump to navigation Jump to search
Want an adless experience? Log in or Create an account.
Sheikah Tower 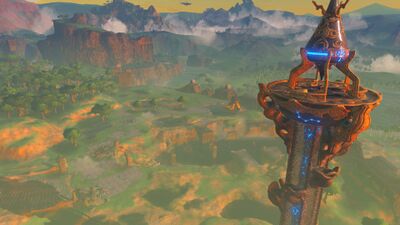 Top and spire of the Great Plateau Tower

A Sheikah Tower is a tall structure from Breath of the Wild and Age of Calamity upon which a Guidance Stone is placed, which contains a map of the surrounding area. They are grey and gold, with a regal design which bears the Sheikah symbol in fluorescent blue. They extend several stories from the ground, which makes it rather difficult for any monsters to ascend the towers.

The Sheikah Towers' function is to provide Link with map information of the current province, which is done by placing the Sheikah Slate in the Guidance Stone pedestal, whilst also acting as an excellent viewing platform for the surrounding areas.

Once activated, Link may use them as a travel gate any time he is able to Warp.

The Sheikah Towers were constructed by the ancient Sheikah of Hyrule over 10,000 years ago. Buried beneath the earth, they had long since been forgotten by the people of Hyrule until Link discovered the top of the tower in the Great Plateau - which had been unearthed in the attack of Calamity Ganon 100 years earlier. After having activated the tower using his Sheikah Slate, the buried tower upon which he stood, along with the other towers across Hyrule, suddenly rose from the earth.

Holding the Sheikah Slate to the Guidance Stones at the top of each tower causes the stone to then scan the landscape of the region of Hyrule in which it is located. This data is then condensed and transferred to the Sheikah Slate, allowing Link to view a geographical map of the region at will. After clearing the Great Plateau, the activation of other Towers is entirely optional.

Unlike other climbable surfaces in the game, due to their mesh exterior, Sheikah Towers do not cause Link to slip when climbing them whenever it's raining. This also makes them the only Sheikah-made buildings Link can climb. The different Towers have a variable number of balconies with covering parapets in which Link can rest upon during his climbs up the towers, and some may be covered in thorns or surrounded by Malice.

At the beginning of the game, the Sheikah Towers lie dormant underground, until they have been activated by Link. This is done by searching for the activation pedestal in the Great Plateau; its location being present on Link's Sheikah Slate after speaking with the Old Man. After the Sheikah Slate has been placed in the pedestal, all of the towers can be seen rising from below in a short cut-scene. Link will now be able to climb all of the towers.

Contrary to Shrines where only activation is necessary, the towers have to be climbed and activated for their Travel Gates to work. As such, when detected by the Sheikah Slate, the tower's icon in the map will be orange, and will turn blue upon activation.

Activation of any tower right after clearing the Great Plateau will activate the Sheikah Sensor.