From Zelda Dungeon Wiki
Jump to navigation Jump to search
Want an adless experience? Log in or Create an account.
Final Trial 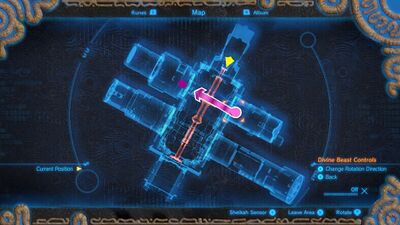 The Final Trial is an additional Divine Beast found in Breath of the Wild, as a part of the second DLC pack, The Champions' Ballad. It takes the form of an engine, and is hidden beneath the Shrine of Resurrection. It can be accessed after Link completes all 16 of the Shrines introduced in the DLC, and beats the four Blight Ganons in their Illusory Realms.

The design is very similar to the other Divine Beasts, and has four different trials based on the previously conquered beasts. The movement mechanic returns, being able to change the direction of the gears from clockwise to counter-clockwise to access new areas in the dungeon. After all the terminals are activated, Link will gain access to the final chamber, where Monk Maz Koshia will congratulate him, and, as one final test, will do battle with Link to see if he is truly worthy.

If Link successfully defeats the Sheikah Monk, he will be rewarded with the Master Cycle Zero. As the Cycle is presented initially at gigantic size, it is implied the Final Trial is the engine of it.