"This two-wheeled vehicle is made of ancient materials. Similar to a horse, it can carry a rider quickly across the land. " 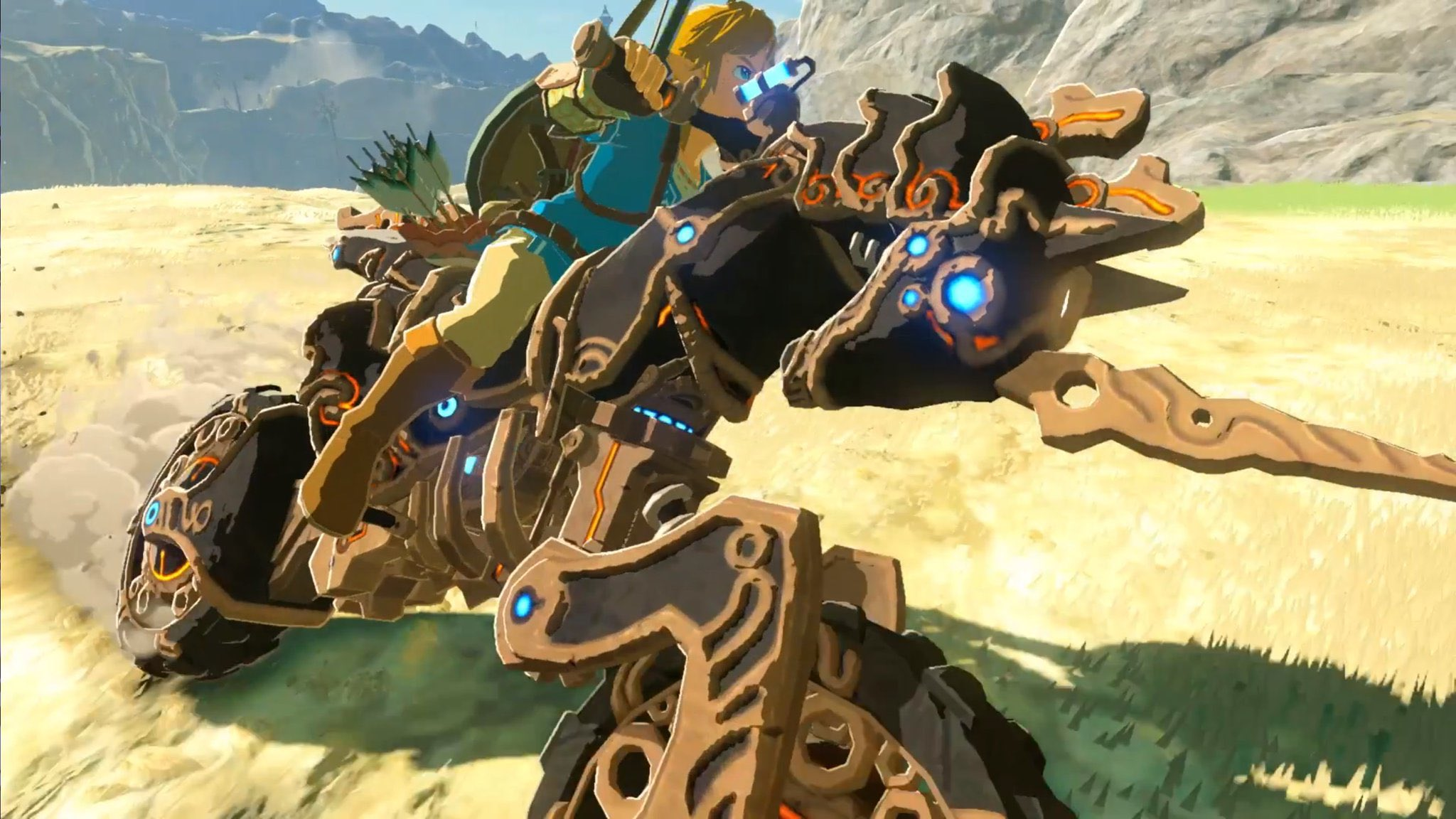 Link as seen riding the vehicle

The Master Cycle Zero is an item that Link acquires in Breath of the Wild as part of The Champions' Ballad. It closely resembles a motorcycle, but is adorned in many Sheikah markings. It is the reward given for defeating Monk Maz Koshia, the boss of the Final Trial Divine Beast.

It functions as a Rune that Link can summon when he so desires, with some limitations:

The Cycle moves at ~16m/sec (~36mph or ~58km/hr), which is equal/faster than a horse at ★★★ tier speed in full gallop. It can take considerably more punishment than a horse would, and won't stop with most obstacles. It will disappear if Link rams it against a wall or trees at full speed (which results in health loss), if dipped in deep water, or if left on its own after a couple of minutes.

It consumes fuel as it is used, which comes in the form of Materials.

It features a front light that is on while Link is riding the Cycle. The light is not noticeable during the day unless Link is riding under a large shadow, and it's more obvious during the night or in the complete darkness of the Thyphlo Ruins.

It's self-balanced, so the player only has to worry about direction, acceleration and camera position. As such, the Cycle will set itself upright after falling from a height. The self-balancing also serves to allow Link to attack with melee weapons and bows without worrying about stability. However, unlike horses, the Cycle doesn't stay on roads, and has to be steered to be kept in them. Additionally, if the left joystick is pressed while holding down while accelerating, the cycle will perform a wheelie, which can be used to scale obstacles by having a better angle of approach.

The Master Cycle Zero has a fuel gauge located above the standard Temperature and Sheikah Sensor gauges when summoned. It has several tick marks showing the fuel level at intervals every quarter of a tank and at empty and full. To refuel the bike, Link must add a combination of up to five various materials by holding them and interacting with the bike. Different materials fill the tank up by different amounts with the more common materials filling the fuel gauge up quicker, and a select few materials applying a 2× multiplier to the fuel worth which is stackable. For example, each piece of Wood added fills up 10% of the tank per piece, with five pieces filling up the tank halfway. If Link replaces a piece of Wood with a Monster Extract, which is worth 1% of a tank plus a 2× modifier, the total amount of fuel added becomes 40% plus 1%, all multiplied by two, so 82% of the tank filled.

Each material falls into a category of how much fuel a single material provides, as given by this comprehensive chart. Multipliers act on the total value of the other materials added in a single refuel, so four apples and a Star Fragment give 82% of a full tank, i.e. (10%+10%+10%+10%+1%)×2.

The fuel tank never exceeds 100% even if using multiplier materials.

Multipliers are stackable - i.e., two Ancient Cores would give a multiplier of 4×.