From Zelda Dungeon Wiki
Jump to navigation Jump to search
Want an adless experience? Log in or Create an account.
Star Fragment

Star Fragments as they appear in Breath of the Wild

Star Fragments are a material from Spirit Tracks, Tri Force Heroes, Breath of the Wild and Hyrule Warriors: Age of Calamity. 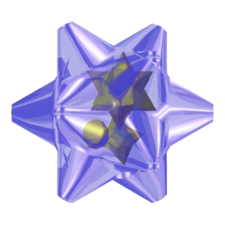 "A sparkly stone that fell from the sky. It's said to be a piece of a star."

Star Fragments are a type of Treasure. They are a common treasure which appear as a sphere with rounded spikes.

They can be sold for 50 Rupees, but are also required to purchase the following train parts:

"Prized as a gift from the sky, this rock is out of this world!"

Star Fragments are a material in Tri Force Heroes, found in the Volcano.

"A mysterious stone fragment that fell from the sky. It looks like it would fetch a good price, but you may able to use it in certain recipes as well."

Star Fragments are one of the rarest materials found in Breath of the Wild, and may fall from the sky at night. The impact site — and therefore the location of the fragment — is indicated by a glowing beacon that will disappear at 5 AM. Additionally, a special sound can be heard near the impact site of the shooting star. The fragments freeze in place when they touch the ground, which can happen on a slope, and materialize once the player approaches them; this may cause the fragment to fall down a slope. Approaching the fragment also causes the beacon of light to disappear. Keep in mind that Star Fragments don't float in water, so a Fragment that lands on a slope next to a body of water will effectively be unrecoverable if it falls in.

Star Fragments can be sold at a price of 300 Rupees, and can be used as ingredients for recipes to yield to guarantee bonus effects on recipes.

You are most likely to spot shooting stars during a Blood Moon, and doubly so from the tops of the Great Plateau and Lake Towers, along with the Southern Dueling Peak, which are basically vantage points where landing sites can be easily located when they happen. This item can additionally be acquired as: loot from Silver Lynels and Gold enemies (Master Mode only); rewards for a few side quests, such as My Hero and Balloon Flight; or in hidden Treasure Chests throughout Hyrule.

These are the requirements for the Dueling Peaks:

A total of 14 star fragments are needed for upgrades in the base game, to upgrade the following base-game items:

With all amiibo armor pieces, there are an additional 74 Star Fragments needed for upgrades. These armor pieces are listed below:

"A mysterious stone fragment that fell from the sky. It looks like it would fetch a good price, but it could also be used in certain recipes."

Unlike other materials, there are a finite amount of Star Fragments to be found. 20 are obtained as First-Clear Rewards from challenges. A total of 22 are needed to complete quests. They cannot be sold or used as materials for upgrades.