"Tarrey Town is a recently established village located on Lake Akkala. It was built from the ground up by Hudson of the Bolson Construction carpenters, who was dispatched by Bolson from Hateno Village. Link aids the process by providing raw materials and finding helpful new residents with names ending in "son" to gradually bring life to the village. It is characterized by the colorful exteriors of its homes, which are similar to those found in Hateno Village." 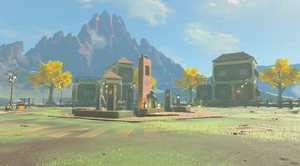 Tarrey Town is a location in Breath of the Wild. It is situated in the south part of the Akkala province. In contrast to other towns in the game, Tarrey Town doesn't exist, save the statue of The Goddess, until you progress the Hylian Homeowner quest to a certain extent, where Bolson will send Hudson to the Akkala province to start work on a new settlement, starting the From the Ground Up Questline, the more of the quest you complete the more you build Tarrey Town, when complete Tarrey Town will have an Inn, two general stores and an armor store. It has a two separate quests not including From the Ground Up, after you've completed From the Ground Up to a certain point. The town is unique for its ideologies; unlike all other settlements, Tarrey Town is not exclusive to a single race, but instead features members from all species, even a Sheikah named Granté, who sells rare and valuable Armour, as well as a Hylian Shield should the original break.

At this store, Fyson sells mostly Arrows and an Ancient Gear.

At this store, Rhondson sells all three pieces of the Desert Voe Set:

The Tarrey Town Inn is run by Kapson, and it offers a free bed to Link.

Start on top of the rock bridge and chase the flower trail by climbing down and around under the bridge.