Zora's Domain (Breath of the Wild)

"This Zora settlement was established over 10,000 years ago when the Zora went in search of a fresh water source. The land is rife with other natural resources as well, including mineral deposits. Zora's Domain features a massive fish-shaped monument at its heart. Water bubbles up below and it runs through the village via beautifully crafted walkways. The settlement is a sight to behold, appearing to have been crafted from a single stone."

Zora's Domain is a location found in Breath of the Wild. Situated in the Lanayru province once more, but is much more elaborate in design than in previous renditions. It is surrounded by mountains and is risen above Ruto Lake. The area is troubled by Divine Beast Vah Ruta, as it is causing mass flooding of the East Reservoir Lake, south-east of the Domain, which threatens to burst and destroy everything in the water's path. 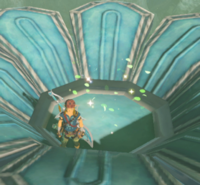 In the 'spout' of the fish statue on top of Zora's Domain, examine the fairy lights.

Examine the fairy lights in the 'spout' of the fish statue on top of Zora's Domain. You can't climb there directly, you'll have to glide from somewhere even higher. 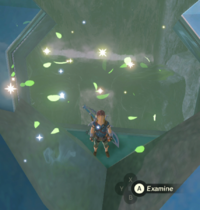 In the tail fin of the fish statue on top of Zora's Domain, almost the very highest point, examine the fairy lights. Click "Korok Seed" above for a tip on how you can avoid climbing up to this seed.

Examine the fairy lights in the tail fin of the fish statue on top of Zora's Domain. It is almost as high as you can possibly go. Here's a hint, if you make your way to the slopes south-east of Toto Lake, you will be high enough to glide down to the seed's location.