This article is about the story scenario from Age of Calamity. For the character which it is named after, see Mipha. 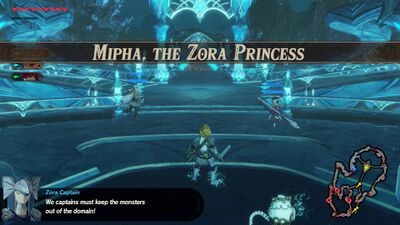 "Zelda and the others arrive in Zora's Domain seeking to recruit Mipha as a pilot. The domain is suddenly attacked, however, and the party fights alongside Mipha to protect everyone."

Mipha, the Zora Princess is the first listed scenario of Age of Calamity Chapter 2, although the four Chapter 2 scenarios can be completed in any order.

King Dorephan refuses Zelda's request for his daughter Mipha to pilot Divine Beast Vah Ruta, while Mipha greets Link for the first time in years. Both are interrupted by bad news, however - the King is told of an invasion of monsters, and Mipha is told that her young brother Sidon has disappeared. Mipha works with the Hylians and their allies to drive back the invading force, before finding that Sidon is challenging a Lynel on Ploymus Mountain. While they manage to save the young Prince, the sight of an even larger second wave of invasion leaves them despairing until the diminutive Guardian gives them the means to activate Vah Ruta through the Sheikah Slate.

Piloting the giant robotic elephant for the first time, Mipha uses Ruta's power to rout the invaders, and is given reluctant permission by her father to become the Divine Beast's permanent pilot.

Note: A quest complete screen appears after the defeat of the Lynel, but the scenario restarts with the Divine Beast Vah Ruta section, with the K.O. total being continuous.

"The long-lived Zora, who could traverse rivers and lakes with ease, lived in Lanayru at a resplendent place dubbed Zora's Domain."

"In order to recruit Mipha as a pilot for a Divine Beast, Zelda makes her case to Mipha's father, King Dorephan. The king refuses to permit Mipha to help, but the audience is cut short when monsters suddenly threaten Zora's Domain."

"Discovering the young Prince Sidon standing up to a Lynel, the party quickly comes to his aid. The Lynel is undeterred by their arrival, brandishing a giant blade and releasing a terrifying roar."

"The party rescues Sidon, but they have no time to rest before an even bigger horde of monsters appears. Comprehending the scale of the attack, Mipha and the others are at a loss for words until the little Guardian gives them a sliver of hope."

"King Dorephan himself takes command of the forces defending Zora's Domain, but even under his guidance, they are backed into a corner by superior numbers. However, salvation arrives in the form of the Divine Beast Vah Ruta, piloted by Mipha."

"After seeing Mipha use the power of the Divine Beast to defeat the Lyunel and hold off the massive attacking horde, King Dorephan acknowledges Mipha's resolve and gives his approval for her to serve as the pilot of the Divine Beast."