EX The Princess and the King

From Zelda Dungeon Wiki
Jump to navigation Jump to search
Want an adless experience? Log in or Create an account.
EX The Princess and the King 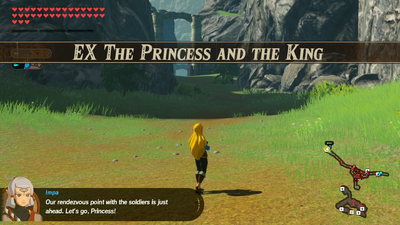 "Zelda escapes Hyrule Castle and plans to rendezvous with her allies. King Rhoam retreats with his surviving soldiers. Father and daughter, neither knowing the other's fate, each fight with all their might to fulfill their own duties. "

Sometime after aiding the three Hylian Captains, a path to the south on the north side of the map will open up. Defeat the monsters in the cave to block the path. 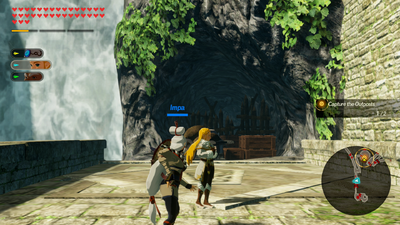 EX The Princess and the King [text]

"Zelda, having escaped Hyrule Castle with the help of her father as it fell into Calamity Ganon's hands, rose with Link to rescue the Champions, still imprisoned in their Divine Beasts across Hyrule."

The Aftermath of Survival

"After a harrowing battle, King Rhoam has exhausted the last of his strength. He is on the brink of defeat when Urbosa and her Gerudo warriors come to his rescue. Hearing that Zelda is searching for him, King Rhoam is filled with guilt as he thinks of his beloved daughter."