From Zelda Dungeon Wiki
Jump to navigation Jump to search
Want an adless experience? Log in or Create an account.
EX Battle for Kakariko Village 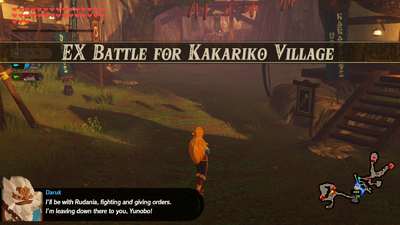 "With Divine Beast Vah Rudania, Daruk and Yunobo rush to protect Kakariko Village from monsters. They divide their forces, with Daruk atop the Divine Beast and Yunobo on the ground, working together to rescue the village."

Don't allow monsters to break into the Kakariko Village outposts.

Keep all monsters out of the two Kakariko Village outposts.

Defeat the Chuchu in the area located to the south on the western side of the map to rescue the Hylian Captain. 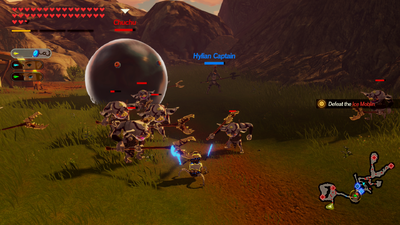 Defeat any monsters that spawn on top of Vah Rudania before the next ones spawn.

"Daruk and Yunobo boarded Divine Beast Vah Rudania together and drove off a great swarm of Guardians from Eastern Hyrule."

The Champion of the Future

"Thanks to Daruk and Yunobo's efforts, the threat to Kakariko Village passed. If only for a short while, tranquility returned. As a crowd of villagers cheers on the Goron heroes, Yunobo fondly recalls the person who taught him to be courageous."