From Zelda Dungeon Wiki
Jump to navigation Jump to search
Want an adless experience? Log in or Create an account.
The Yiga Clan Attacks! 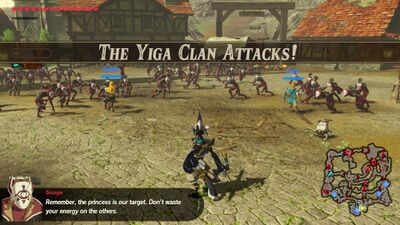 "Zelda and the party journey to the Lanayru region to continue work with the Divine Beasts. However, Sooga and the Yiga Clan assassins attack before they can reach their destination."

The Yiga Clan Attacks! is the final scenario of Age of Calamity Chapter 2. It is unlocked by completing all four of the Champion recruitment scenarios in Chapter 2.

Zelda leads Link, the Divine Beast pilots and a small group of Hylian Soldiers to train with their giant mecha. While Mipha is asking Daruk about joining him for training; the Yiga Clan, led by Sooga, attack. While Link attempts to get Zelda to safety, Impa and the future Champions attempt to clear the battlefield. While they succeed, it is a diversion, meant to allow Sooga to get close to Zelda herself. Link must then defeat Sooga to save the princess.

"With that, the four Divine Beasts were assembled with their pilots. Training began in earnest, and the plan to defeat Hyrule's enemies began to coalesce."

"Zelda has been successful in her recruiting mission, yet the king remains stern with her. Told to focus on her training now more than ever, Zelda tells the little Guardian of the insecurities she carries with her."

"Zelda departs Hyrule Castle and sets out with the pilots for the Lanayru region, where they intend to train with the Divine Beasts. The party talks amongst themselves as they travel, but their progress is abruptly halted when the Yiga Clan appears, intent on taking Zelda's life."

"Link and the others fight bravely in the intense battle and manage to rout Sooga and the Yiga Clan. Zelda offers Link gratitude for his protection, and finds herself slowly coming to trust him more and more."