From Zelda Dungeon Wiki
Jump to navigation Jump to search
Want an adless experience? Log in or Create an account.
Impa's Training 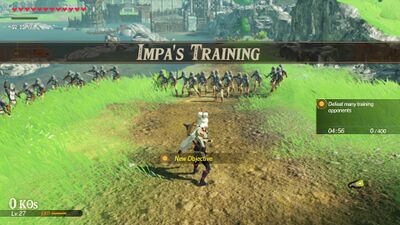 "One of Impa's deepest desires is to help Princess Zelda however she can. Today, that means training and becoming stronger so she can protect the princess from whatever dangers await."

Impa's Training is a challenge scenario of Hyrule Warriors: Age of Calamity, unlocked by completing The Yiga Clan Attacks!.

Impa must defeat 400 training opponents - primarily Hylian Soldiers, but some Hylian Captains will spawn during the battle - in the allocated five minutes of time. After defeating 400 enemies, Impa will then need to defeat three Hylian Captains to complete the mission.

Completing this challenge will unlock the quest To Bring the Village Together.